'Fantastic Beasts: The Crimes of Grindelwald -- Makers, Mysteries, and Magic' Available for Preorder from Audible 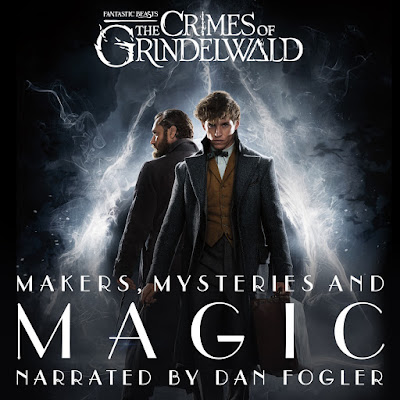 FANTASTIC BEASTS: THE CRIMES OF GRINDELWALD - MAKERS, MYSTERIES AND MAGIC

A global first, this original non-fiction audiobook captures the magic of moviemaking behind the latest installment in the Wizarding World series. With unrivalled access to the film’s cast, director, producers, and other filmmakers, this new audiobook pulls back the curtain on one of the most hotly anticipated blockbusters of the year. Dan Fogler (Jacob Kowalski) taking listeners on an audio adventure around the backlot of Leavesden Studios, into rehearsals and workshops.

“This whole experience has been an adventure for me and I’m really excited for fans to come along for the ride,” said Fogler. “We made an exclusive, all-access audiobook that takes you to places that no microphone has been before. If you’ve ever wanted to know what it takes to make not just an epic movie but one set in the Wizarding World, this is a must-listen! It covers everything from props, costumes, and acting... to wands and Nifflers! I hope you enjoy listening to it as much as we’ve enjoyed making it.”

“We are thrilled to offer Audible listeners the opportunity to enjoy a brilliant performance of yet another essential component of the Wizarding World,” said Audible EVP and Publisher Beth Anderson. “Dan’s narration and the insights shared by the cast, creators and makers give listeners an unprecedented behind-the-scenes look at the making of the latest chapter in the Fantastic Beasts film series."

"This genre-bending production is truly an audio first, blending Dan Fogler's warm comic performance with real-life documentary recordings captured on the set of one of the most anticipated films of 2018,” said Senior Commissioning Audio Editor at Pottermore Publishing, Ravina Bajwa. “We are thrilled to be working with the Audible Originals team who have brought creative flair and expertise in original audio storytelling, in order to create a one-of-a-kind sensory experience of life on a film set.”

ABOUT AUDIBLE, INC.
Audible, Inc., an Amazon.com, Inc. subsidiary (NASDAQ:AMZN), is the leading provider of premium digital spoken audio content, offering customers a new way to enhance and enrich their lives every day. Audible was created to unleash the emotive music in language and the habituating power and utility of verbal expression. Audible content includes more than 450,000 audio programs from leading audiobook publishers, broadcasters, entertainers, magazine and newspaper publishers, and business information providers. Audible is also the provider of spoken-word audio products for Apple’s iTunes Store.

ABOUT POTTERMORE PUBLISHING
Pottermore Publishing is the global digital publisher of the Harry Potter and Fantastic Beasts series as well as other audiobooks and eBooks from the Wizarding World. It aims to lead the way in innovative digital publishing and to bring new generations of readers together with long-standing fans, celebrating and bringing to life the stories that first began with the Boy Who Lived.


ABOUT WARNER BROS. CONSUMER PRODUCTS
Warner Bros. Consumer Products (WBCP), a Warner Bros. Entertainment Company, extends the Studio’s powerful portfolio of entertainment brands and franchises into the lives of fans around the world. WBCP partners with best-in-class licensees globally on an award-winning range of toys, fashion, home décor, and publishing inspired by franchises and properties such as DC, J.K. Rowling’s Wizarding World, Looney Tunes and Hanna-Barbera. The division’s successful global themed entertainment business includes groundbreaking experiences such as The Wizarding World of Harry Potter and Warner Bros. World Abu Dhabi (opening 2018). With innovative global licensing and merchandising programs, retail initiatives, promotional partnerships and themed experiences, WBCP is one of the leading licensing and retail merchandising organizations in the world.

ABOUT THE WIZARDING WORLD
More than two decades ago, a young Harry Potter was whisked onto Platform 9¾ at King’s Cross Station, and readers everywhere were swept along with him into a magical universe, created by J.K. Rowling. In the years since, the seven Harry Potter bestsellers have inspired eight blockbuster movies, an award-winning stage play, and, more recently, the successful start of the Fantastic Beasts five-film franchise. People of all ages have been enthralled by these extraordinary adventures, set within an ever-widening shared universe, inspired by the vision of J.K. Rowling.

For today’s growing worldwide fan community, and for generations to come, the Wizarding World welcomes everyone to explore more of this magical universe — past, present and future. The Wizarding World also provides fans with an instant, trusted kite-mark of quality and authenticity.

Thank you to Audible for the press release.