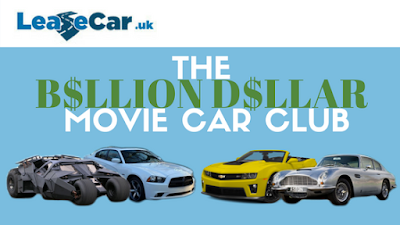 They’ve starred in some of the highest grossing movies of all time, now Hollywood’s biggest four wheeled stars have been named for the very first time.

New research by motoring experts LeaseCar.uk has revealed a handful of motors who qualify for an exclusive Billion Dollar Movie Car Club - vehicles which played a significant role in a billion-dollar movie or movie franchise.Surprisingly many of Hollywood’s most iconic car movies failed to qualify for the club as only those grossing a billion or more at the box office were deemed worthy of inclusion.

The nine cars which made the cut can be considered the highest earning movie motors of all time - and there are some surprises amongst them.

Researchers carefully calculated exactly how much screen time each car received and worked this out as a percentage of the movie’s run time.

This figure was then used to calculate the exact revenue the cars could have been considered to ‘earn’ at the box office - creating a definitive list of the highest grossing cars in Hollywood history.

The focus on box office takings meant some of the best-known car movies didn’t get a look in. The Italian Job, for example, took only $10m in 1969 and its remake managed $176m in 2003 - far below the threshold required for the Billion Dollar Movie Car Club.

Surprisingly the research revealed that the biggest car movie star of all time is the humble Jeep from the Jurassic Park movie franchise.

Perhaps most famous for the T-Rex attack scene in the very first Jurassic Park movie starring Jeff Goldblum, a combination of serious screen time and sky high box office takings took the Jeep to the top of the chart when it came to cash generated while on screen.

It fought off stiff competition from more iconic car stars such as the Dodge Charger from The Fast and the Furious franchise, the Delorean from Back to the Future and James Bond’s Aston Martin.

The Jeep played an important role in many of the Jurassic Park movies and was on screen for a lengthy 24mins and 26 seconds, or 19.7%, of the film which kicked off the franchise.

The franchise has grossed a massive $4.1 billion to date with the first movie alone generating $1.02billion. With the Jeep on screen for 19.7% of the movie researchers attributed a massive $200,940,000 to it making it the highest earning car movie star of all time.

The only other car to give the Jurassic Park Jeep a serious run for its money is the Dodge Charger from the Fast and the Furious franchise.

The Fast and Furious series has become perhaps the best-known car movie franchise in the world with global box office of $5.1billion. The Dodge, or rather a succession of them, is driven by character Dominic Toretto, played by actor Vin Diesel.

Harry Potter is the biggest movie franchise of all time with global box office takings of $8.5billion. The most famous car in the Harry Potter movies is the flying Ford Anglia which plays a key plot role in Harry Potter and the Chamber of Secrets, which took an impressive $879m at the cinema.

The flying Ford Anglia was on screen for 8mins 55 seconds, or 5.1% of the movie, which was the second instalment of JK Rowling’s Potter series. Researchers calculated the car’s appearance was worth $44,829,000 dollars - 5.1% of the box office takings.

Star Wars, the second highest growing movie franchise of all time with takings of $7.5billion, is better known for spaceships than land vehicles but Luke Skywalker’s Landspeeder from original movie A New Hope was included in the research.

James Bond’s Aston Martin DB5 is another contender for the most iconic movie car of all time but it is far behind the Jurassic Jeep and the Fast & Furious Dodge in terms of movie earnings.

The Bond franchise has certainly done the business at cinemas with global box office of $7.07 making it the third highest grossing movie franchise behind Harry Potter and Star Wars.

Researchers from motoring experts LeaseCar.uk focused on the car’s appearance in Skyfall - a stand-alone billion-dollar movie with takings of $1.1billion. The car shared the screen with Daniel Craig for 4mins 50 seconds or 3.4% of the movie run time, meaning it ‘earned’ $37,400,000 of the takings.

Another favourite movie car, the time travelling Delorean from the Back to the Future movies, managed to clinch third place on the list of highest grossing cars.

Researchers found that while the entire franchise took $1billion in total, the car really was the star with significant screen time - just under 15% across all three instalments - to earn a box office total of $148,393,000.

Other cars included in the billion-dollar club included the 1912 Renault Type CB Coupe de Ville from the movie Titanic. Despite not being part of a franchise the movie alone took a whopping $2.1billion at the box office. The car was on screen for 2mins 30 seconds, or 1.3% of the run time, earning a still impressive £27,300,000.

The Transformers movies have earned $4.3billion in total. The Age of Extinction instalment made $1.1billion alone. Researchers focused on ‘Bumblebee’ a Chevrolet Camaro, which was on screen for 10mins and 5 seconds or 6.1% of the film, meaning it was responsible for $67,100,000 of the take.

The Batman movies have taken a total of $4.6billion with Batman vs Superman taking $872m. The iconic Batmobile was on screen for 2.8% of the movie giving its appearance a value of $24,416,000.

A spokesman for motoring experts LeaseCar.uk, who completed the study, said: “Cars have played an important part in Hollywood since the days of silent movies. Some vehicles have become almost as famous as the characters and the actors who drive them.

“Everyone associates James Bond and Daniel Craig with the Aston Martin and you can’t think about Michael J Fox or Marty McFly without thinking about the Delorean.

“Other movies have put cars at the centre of the action and the Fast and the Furious franchise has become popular with petrolheads around the world.

“For our study though we wanted to find out once and for all which cars were the biggest stars of all time when it comes to Hollywood blockbusters.

“We decided to focus both on box office takings and on screen time and crunched the numbers to reach a definitive list.

“The results might surprise some people. Few would have predicted the Jeep from Jurassic Park was the biggest car movie star of all time but the numbers tell their own story.

“If there was an Oscar for Highest Grossing Car the Jurassic Jeep would win it hands down. Best Supporting Car would go to the Dodge from Fast and Furious.

“Our personal favourite is the Delorean from Back to the Future but you have to add all three movies up to qualify for the Billion Dollar Movie Car Club. Maybe the time travelling car could get an Oscar in Lifetime Achievement category?”