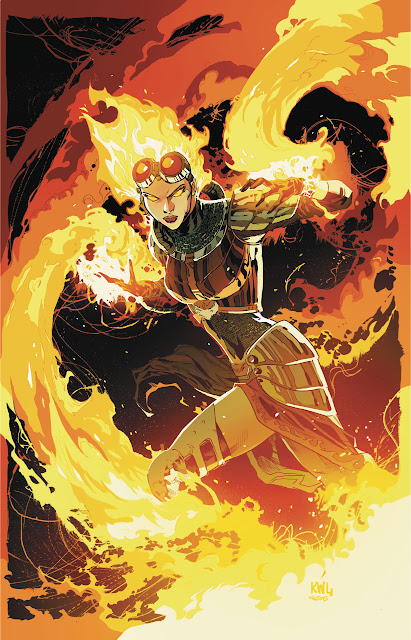 IDW Publishing and Wizards of the Coast Celebrate 25 Years of Magic: The Gathering with All-New Comic Written by Vita Ayala with Interior Art by Harvey Talibao

"Think of a character that you love. From any story, from any property. There is an excellent chance that you were introduced to that character by some kind of page, or some sort of screen," said Jeremy Jarvis, Magic: The Gathering Franchise Director. "We are thrilled to have Vita and Harvey introduce you to Chandra, to her story, her quirks, and her incredible powers. Set in the near future of the Multiverse, these never-before-told stories will breathe life into Chandra, her cohorts, and her enemies in new and visually striking ways. Knowledge of cards is optional, love of characters required."

"I can't hold back my excitement about this new Magic: The Gathering comic book!" said IDW Editor-in-Chief John Barber. "With meteorically rising star Vita Ayala penning these tales, with the incredible art of Harvey Tolibao delineating the adventures, and with the introduction of the dynamic and powerful Chandra Nalaar, it's clear we've entered a bold new era of storytelling. Everybody involved in this comic is dedicated to bringing you emotional and thrilling experiences that will satisfy fans of Magic: The Gathering—as well as fans of stories packed with action and drama told from a unique point of view."

An adventurous Planeswalker and powerful pyromancer, Chandra Nalaar has seen much in her time—but she had never experienced such tragedy before. In the wake of a devastating loss, Chandra is striking out on her own, determined to prove—to her family and to herself—that next time she'll be prepared. But when faced with threats both old and new, will she be able to overcome her grief in time to survive? And who is that familiar face lurking in the shadows?

Magic: The Gathering: Chandra #1 will be available in November.