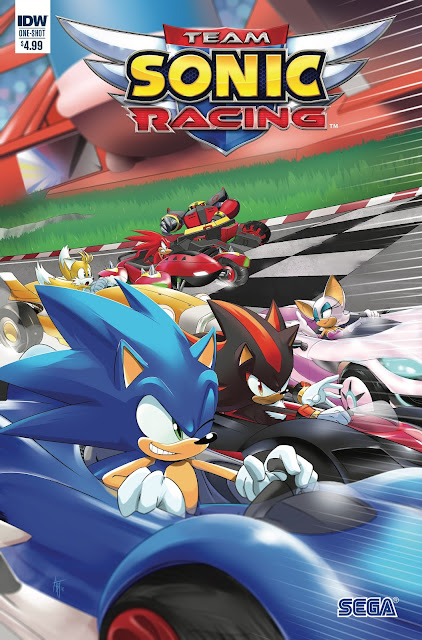 Sonic and his teammates Knuckles and Tails journey to a new planet and enter a race unlike any other! With a little help from friends like Amy Rose, Big the Cat, and a few other familiar faces, Sonic must race to prevent an old foe from obtaining a powerful new technology in this story by writer Caleb Goellner (Teenage Mutant Ninja Turtles) and longtime Sonic The Hedgehog artist Adam Bryce Thomas.

“I'm so stoked to write Sonic! It's been a dream of mine ever since my dad surprised me with my first Sonic comic in ’92, so I can’t wait for fans to take this issue for a Spin Dash,” says Caleb Goellner. “It’s been an honor to be on a team working to deliver an issue that’s as fun to read as Team Sonic Racing is to play.”

Adam Bryce Thomas says, “I’m thrilled to be part of IDW’s newest comic project. Illustrating action packed scenes is my go-to for Sonic, so what could be better than our rival teams jockeying for position? SEGA is known for its phenomenal racing titles and I'll be doing my best to bring comic fans the breakneck speed and excitement they expect.”

“There’s a lot to be thrilled about with Team Sonic Racing,” says associate editor David Mariotte. “The game exemplifies a lot of what's best about Sonic—naturally, there’s action, speed, and style, but there’s also teamwork and Big the Cat. Adam and Caleb do a great job of translating all of that into one of the best-looking, most fun comics we’ll see all year.”

About SEGA of America
SEGA of America is the American subsidiary of SEGA Games Co., Ltd. The company plans, develops, publishes, and distributes interactive entertainment for home video game consoles and PC. www.sega.com