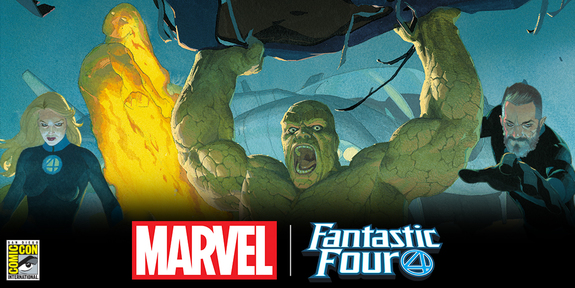 Next week, Marvel New Media will hit the ground running at San Diego Comic-Con 2018 with exclusive reveals, segments, interviews, panels, and cosplay with This Week in Marvel, Women of Marvel, Earth’s Mightiest Show, and more! To stay-up-to date on minute-by-minute Marvel news, Marvel will be live streaming from the Marvel Booth every day starting at 11:00am PT on Thursday, July 19, and 10:00am PT Friday through Sunday, July 22 with stars from your favorite Marvel Television shows, comic creators, and other SDCC celebrities.

For breaking news and exclusive livestream coverage from Marvel at San Diego Comic-Con, watch on www.marvel.com, Facebook, and YouTube. Coverage is hosted by Ryan Penagos, Lorraine Cink, Langston Belton, Angélique Roché, Jamie Frevele, Justin Warner, and Josh Saleh. Tour the convention floor with Marvel, learn about some of your favorite Marvel characters, and don’t miss a beat from the Marvel stage and events within and around SDCC! Check out the full schedule of Marvel New Media panels and stage events below:

Marvel: This Week in Marvel: Tales to Astonish

Cool #seeeekrits revealed? Totally possible! An hour of fun stories and chit-chat with awesome people from Marvel? You better believe it! Join co-hosts Ryan “Agent M” Penagos and Jamie “Hasn’t Picked a Super Hero Name Yet” Frevele as they talk with Marvel editors, writers, and creatives about their Marvel origin stories, favorite story arcs, and more in this very special live episode of the This Week in Marvel podcast!

Across comic books, television, new media and more – the Women of Marvel are here! Join the conversation as this diverse and talented group of women to discuss the creative process, what it’s like working as a woman in comics today and what it means for the future of the industry! Panelists include Kat Khavari (Ms. Marvel voice actor), Milana Vayntrub (Squirrel Girl voice actor), Mairghread Scott (Marvel Rising feature writer), Kristi Reed (Marvel Rising voice director) and G. Willow Wilson(writer and co-creator for Marvel Rising), moderated by Sana Amanat (VP, Content and Character Development, Marvel) and Judy Stephens (Producer, Marvel).

San Diego, here we come! Hosts Lorraine Cink, Langston Belton and Ryan Penagos give you a sneak peak of everything that Marvel has to offer – at SDCC and beyond!

Marvel cosplayers assemble! Bring your latest and greatest Marvel cosplay for this annual event where you can show off your duds on the Marvel booth stage!

This Week in Marvel Live from the Marvel Stage

Join host Ryan Penagos, along with some special Marvel guests, to discuss some of the exciting work going on at Marvel.

Join celebrity chef Justin Warner and a special guest as they make a con-tastic snack inspired by Mr. Fantastic.

Join us for our annual Marvel cosplay competition. For official rules: marvel.com/SDCCCostumeContest

Join us for our annual Marvel kids’ costume event!

Join Ryan Penagos and Jamie Frevele as they talk comics with special guests and inspire the creation of live Marvel coffee art.