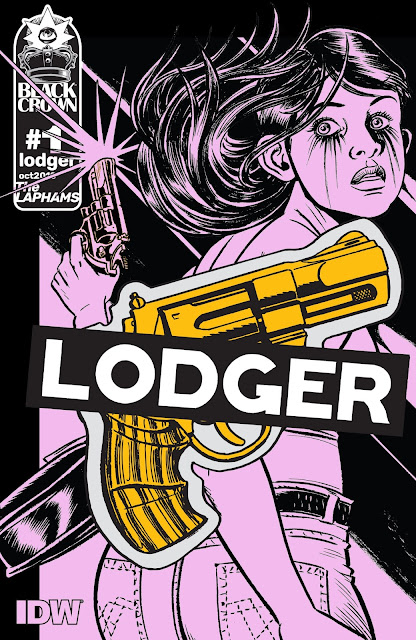 A Serial Killer, a Girl, and a Gun (Named Gold-Digger)

David and Maria Lapham, the creative legends behind the long-running, Eisner Award-winning comic book series Stray Bullets, bring Lodger, a brutal psychological thriller, to Black Crown, IDW’s creator-owned imprint for fiercely independent voices. Debuting in October, Lodger is a pulse-pounding game of cat-and-mouse through roadside America between a vengeful young woman and the serial killer who ruined her life.

“When it comes to crime fiction in any medium, one name remains unparalleled,” says editor Shelly Bond. “The Laphams bring over twenty years of blood, guts, and glory to Black Crown with this lurid tale of lust, secret identities, and sweet revenge."

Lodger follows a handsome drifter who murders his way through the Midwest while hiding in plain sight as a travel blogger using the alias “Lodger.” With an almost supernatural ability to change appearance, he leaves families in shreds and body bags in his wake. He’s pursued across the country by Ricky Toledo, a teenager who fell hard for the mysterious stranger years ago when he rented a small room in her home – right before he killed her mother and framed her father.

Co-writer Maria Lapham adds, "David and I rarely have time to work on stories that don’t fit into Stray Bullets continuity, but Shelly Bond and Ricky Toledo had other ideas. Lodger is a twisted love story – dark and grimy — like all the best crime noir. We can’t wait for readers to see it."

For information on how to secure copies of Lodger, please contact your local comic shop or visit www.comicshoplocator.com to find a store near you.