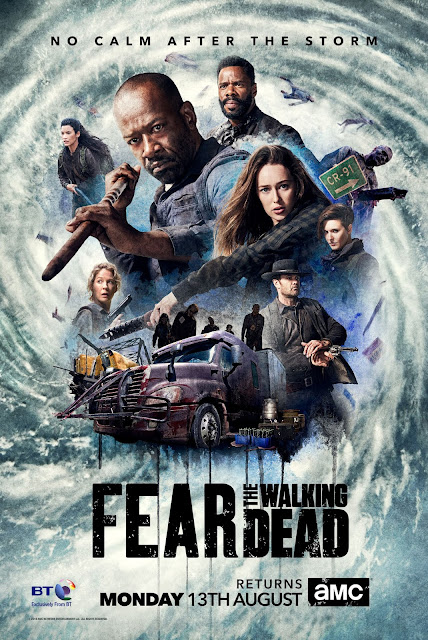 Cast And Producers To Appear At SDCC 2018

The cast and producers of AMC’s hit scripted series “Fear the Walking Dead” will return to this year’s Comic-Con in San Diego, California this month.  The network also released today new key art for “Fear the Walking Dead,” which returns for the second half of its fourth season on AMC on Monday 13thAugust at 2:00am, simultaneous to the US premiere, with a repeat at 9:00pm, exclusive to BT customers.

AMC is available free of charge in the UK to BT customers on channel number 332 on BT TV, and to BT Sport Pack subscribers on Sky channel 192.  AMC is also available in HD on both BT TV and Satellite with an HD subscription.

The first half of season four began with one figure huddled around a campfire, and ended with nine. Characters who started their journeys in isolation collided with each other in unexpected ways and found themselves in one of the last places they ever expected to be...together. In the back half of the season they will explore who they are now – as individuals and as part of the greater group – and how they will forge ahead. They will find themselves pitted against new adversaries – human, walker, and even nature itself. Theirs will be a journey wrought with danger, love, heartbreak, loss, and ultimately, hope. The series is produced by AMC Studios.