INTRADA Announces James Horner's THE BOY IN THE STRIPED PAJAMAS 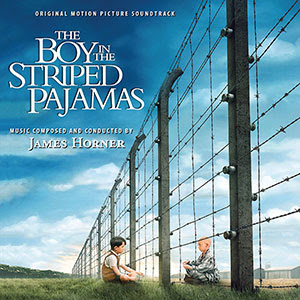 THE BOY IN THE STRIPED PAJAMAS Composed by JAMES HORNER

James Horner's gift, among many gifts, was his ability to find and focus on the most intimate and subtle emotions, bringing them to the forefront with his music. It mattered not whether he was scoring an epic like Titanic or an intimate drama like The Man Without a Face. The 2008 film The Boy in the Striped Pajamas was of the latter type, a film where the interior life of the characters was the driving force of the drama. Horner purposely avoids drawing attention to the music by limiting his palette to the somber sounds of piano, strings, oboes, French horns, low-lying trumpet and occasional ambient sounds. No other percussion — but the piano is always in the spotlight. Harmonic color is important, with relatively little dissonance. As the composer described it, the score undergoes a transformation over the course of the film, having very little forward momentum to "suddenly becoming panic."

Horner, along with recording engineer Simon Rhodes, mixed and assembled a generous 52-minute album at the time of the film’s release, though it was never issued in physical form until this premiere Intrada CD. Recorded at the Eastwood Scoring Stage at Warner Bros. Studios in Burbank, California, this album covers almost all the score and features several lengthy tracks comprising multiple cues, as was customary for the composer.

The 2008 film adaptation tells the story of eight-year-old Bruno (Asa Butterfield), a boy growing up in 1944 Berlin until his soldier father, Ralf (David Thewlis), receives a promotion and moves the family out of the city. Unhappy to leave his friends, Bruno does not adjust well to the change and feels imprisoned by the old, fortress-like house. One day, disobeying his parents, he escapes over the wall and goes exploring. He comes upon a fenced-off compound that he had already noticed through his window (until his parents covered the view). He sees a boy sitting on the other side of the fence and they begin an awkward friendship. Meanwhile, Bruno’s mother, Elsa (Vera Farmiga), slowly starts to understand— to her horror—the true nature of her husband’s new assignment. It all leads to a painful, tragic conclusion.