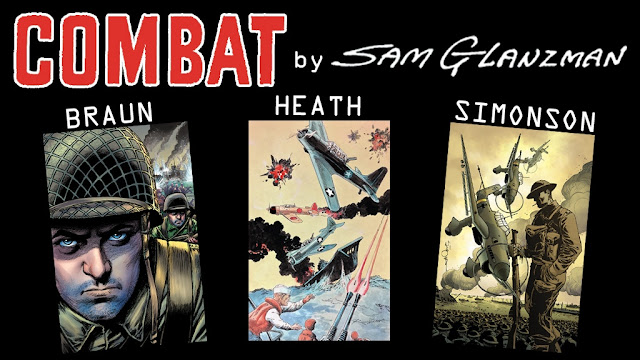 Each issue also has a standard cover created using artwork by the late Sam Glanzman, and all six comics are up for grabs in the new Kickstarter.  Also, there will be a limited number of signed copies of the variant covers by Simonson, Heath, and Braun!  COMBAT is a legendary comic book, that told true stories of WWII month after month, for several years.  There was, in fact, 26 issues in all, and Sam Glanzman illustrated all of them!  IT'S ALIVE! is thrilled to reprint these incredible comics, giving a whole new generation of readers a chance to discover and enjoy classic WWII war comics.
"COMBAT, as a series, is an important early example of war comics,” says Ford. “These first few issues tell three of the most compelling and unforgettable true stories of WWII. Beyond that, I am very honored to continue bringing back the magnificent work of Sam Glanzman. And I am so grateful that Walter Simonson, Russ Heath, and Russ Braun all contributed such incredible variant covers. We hope you will give it a look, and consider making a pledge."
As some extra incentive to pledge now, for one week only there will be a handful of Early Bird Special rewards that folks will want to grab before they disappear!