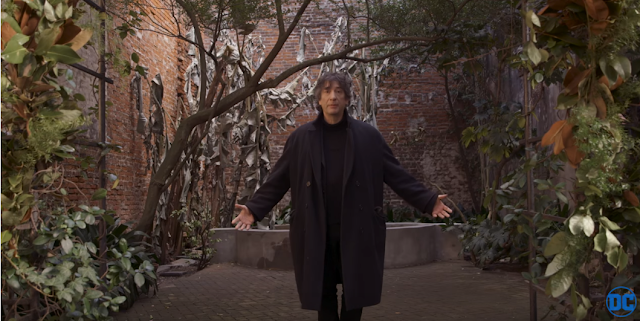 DCAA announced THE SANDMAN UNIVERSE, the next chapter of The Sandman in celebration of the 30th anniversary. Check out info on the upcoming Vertigo title in the video below. Also below is info on The Terrifics, Metal’s latest spinoff, and the new Poison Ivy. Also check out the return of iZombie and Gotham!

Neil Gaiman's Sandman Universe Announcement
Four books. One remarkable universe. In celebration of The Sandman's 30th Anniversary, Neil Gaiman and Vertigo Comics proudly introduce The Sandman Universe, the next chapter in one of the most influential and beloved works of fantasy ever devised. Four new series set in the world of Gaiman's comic, written by four masters of imagination.

GOTHAM: Jerome’s Legion & New Poison Ivy + TERRIFICS: Metal’s Latest Spinoff
Gotham returns this week, and DC All Access is here to bring you up to speed on all the craziness that awaits you. And we do mean craziness, as the rest of the season finds Jerome leading a super-team of super-baddies. Executive producers Danny Cannon and John Stephens drop by to discuss the show's spring premiere, including Gotham's new Poison Ivy and the return of some fan favorite villains. Also, we look at the first issue of The Terrifics and talk to writer Jeff Lemire about how the series came together. Plus, guest host Rahul Kohli discusses the next episode of iZombie, we highlight some must-read new comics and pick an amazing new panel of the week. (Seriously, wait till you see it.)

VINTAGE: Suicide Squad Invades Six Flags Fright Fest
A DC All Access "Vintage" Segment! It's the video that's haunted us for two years! Back in 2016, to celebrate the release of Suicide Squad, the talented makeup artists at Six Flags Fright Fest turned Tiffany into...well, you'll just have to see. Enjoy this trip down memory lane. Just make sure avoid any dark alleyways along the way…

iZOMBIE & GOTHAM Return! w/ Rose McIver & Camren Bicondova
It's the return of the living dead! And the return of the...er, really unlucky Gotham City detective! iZombie and Gotham are back this week, #DCTV fans, and Hector is here to catch you up on all you need to know. Plus, he's not alone! Liv Moore herself, Rose McIver, drops by to discuss how the world of iZombie has changed since the undead went public. Then we talk to Camren Bicondova about what lies ahead for Gotham's Selina Kyle and Bruce Wayne. Plus, we have your answers to last week's burning question. Yes, YOURS! Well, maybe we do. Why don't you watch and find out?