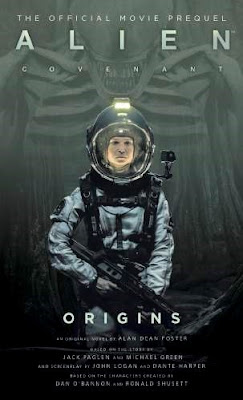 An original novel by ALAN DEAN FOSTER, author of the groundbreaking Alien novelization, Origins is the official chronicle of the events that led up to Alien: Covenant. It also reveals new details about the world the colonists left behind.

Alan Dean Foster is the acclaimed author of movie tie-ins for Star Wars, Alien, Terminator: Salvation and Transformers. He was awarded the IAMTW Grand Master Scribe Award in 2008.

A best-selling science-fiction and fantasy author in his own right, he has written the popular Pip and Flinx novels and the Founding of the Commonwealth series.

With tensions increasing between those plotting to sabotage Weyland-Yutani’s Covenant mission, Alien: Covenant Origins is a tense and gripping build-up to the impending doom of the critically acclaimed Alien: Covenant movie. Alan Dean Foster, renowned Alien fiction author, creates a thrilling, atmospheric and revealing original prequel as the Covenant team assembles and band together to ensure their life-changing mission succeeds. The Covenant mission is the most ambitious endeavor in the history of Weyland-Yutani. Bound for Origae-6, the ship will carry two thousand colonists beyond the limits of known space. This is a make-or-break investment for the corporation—and for the future of all mankind.

Yet there are those who would die to stop the mission. As the colony ship hovers in Earth orbit, several violent events reveal a deadly conspiracy to prevent the launch, no matter what the cost. While Captain Jacob Branson and his wife Daniels complete their preparations, security chief Daniel Lopé recruits the final key member of his team. Together they seek to stop the perpetrators before the ship and its passengers can be destroyed.