Wonder Woman out on Blu-ray and DVD October 9 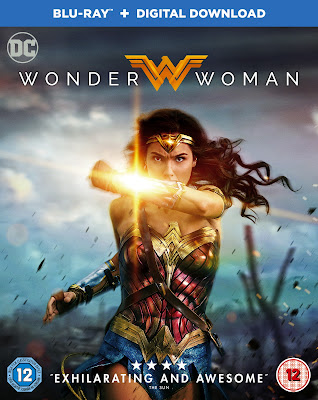 The 4K UHD, Blu-ray™ 3D and Blu-ray™ will include an all-new bonus scene never before seen in cinemas as well as interviews with filmmakers, featurettes, and extended scenes.

The Blu-ray™ discs of “Wonder Woman” will feature a Dolby Atmos® soundtrack remixed specifically for the home theatre environment to place and move audio anywhere in the room, including overhead. To experience Dolby Atmos at home, a Dolby Atmos enabled AV receiver and additional speakers are required, or a Dolby Atmos enabled sound bar; however, Dolby Atmos soundtracks are also fully backward compatible with traditional audio configurations and legacy home entertainment equipment

Before she was Wonder Woman, she was Diana, princess of the Amazons, trained to be an unconquerable warrior.  Raised on a sheltered island paradise, when an American pilot crashes on their shores and tells of a massive conflict raging in the outside world, Diana leaves her home, convinced she can stop the threat. Fighting alongside man in a war to end all wars, Diana will discover her full powers…and her true destiny.
PRODUCT INFORMATION
Rated – PG – 12
Run time: 141 minutes
“Wonder Woman” 4K UHD, Blu-ray™ 3D and Blu-ray™ contain the following special features:

Epilogue: Etta’s Mission
Etta Candy gets the boys back together for a secret mission that could impact humanity’s future.
Crafting the Wonder
Wonder Woman finally comes to life in her first, breathtaking solo film. Explore the journey to create an adventure worthy of DC’s greatest warrior.
A Director’s Vision: Themyscira: The Hidden Island
A Director’s Vision: Beach Battle
A Director’s Vision: A Photograph Through Time
A Director’s Vision: Diana in the Modern World
A Director’s Vision: Wonder Woman at War
Join director Patty Jenkins as she takes you on an exclusive journey through “Wonder Woman’s” most pivotal and exciting moments
Warriors of Wonder Woman
Witness the creation of the Amazon army as the women of “Wonder Woman” transform emotionally and physically into the world’s most powerful and heroic warriors.
The Trinity
Filmmakers and comic book creators explore the legend of Wonder Woman and how she stands shoulder to shoulder with Superman and Batman to create the pillars of the DC Universe.
The Wonder Behind the Camera
Meet the women behind the wonder as they welcome a group of aspiring filmmakers on set for an exclusive, once-in-a-lifetime experience.
Finding the Wonder Woman Within
Feel the power of Wonder Woman as award-winning poets and inspiring public figures reveal the impact and importance of DC’s greatest heroine.
Extended Scenes
Blooper Reel
“Wonder Woman” Standard Definition DVD contains the following special features: