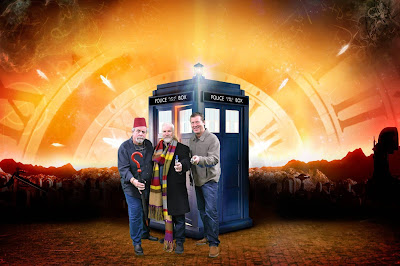 The stars of Mystery Science Theater 3000 and RiffTrax are setting their sights on Doctor Who. In an upcoming RiffTrax Live presentation, Mike Nelson, Kevin Murphy, and Bill Corbett will turn their trademark riffs to the Classic era with "The Five Doctors." 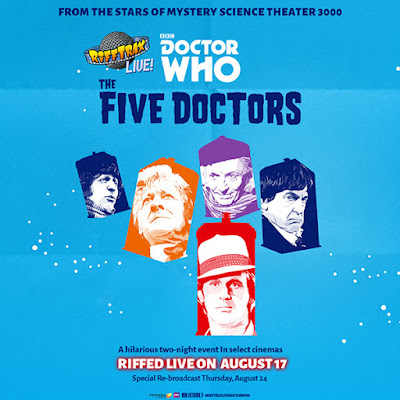 The stars of Mystery Science Theater 3000 are returning to the big screen with a hilarious 2-night event!
Fathom Events is partnering with BBC Worldwide North America and RiffTrax.com® to bring the Classic Doctor Who special The Five Doctors to select theaters nationwide, riffed live and simulcast through select theaters across the country on August 17, followed by a special re-broadcast on August 24.
Originally released in 1983 for the Doctor Who 20th anniversary, the story follows various incarnations of the Doctor who have been pulled out of time and space by a devious Time Lord Traitor who's trying to uncover ancient secrets of the first and most powerful ruler of Gallifrey – Rassilon.
For tickets and additional information, visit Fathom Events.


Mike, Kevin, and Bill recently visited Cardiff where they were treated to the full Doctor Who experience in order to prepare for the riffs ahead. Hear what they had to say below:


Order your tickets now at Fathom.com.