'RED WHITE AND WHO: The Story of Doctor Who in America' Available for Pre-Order 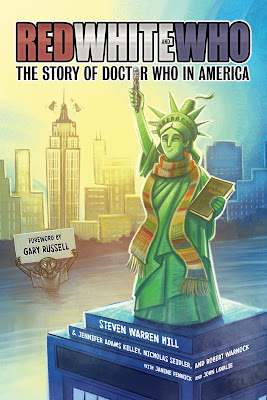 A new book by ATB Publishing, RED WHITE AND WHO: The Story of Doctor Who in America, sets out to examine the origins and rise of Doctor Who fandom in the US, from the early days of PBS to the explosion of its popularity in current era.

Here is the official synopsis:

Every American DOCTOR WHO fan has a story to tell, and fans of the iconic British television show love to tell stories. All of them, from the casual to the obsessed, will happily regale others with the tale of how and when they discovered the greatest science fiction media franchise ever. Most early American fans first met the Doctor in the early 1980s, nearly twenty years after the show began in 1963…but the story of DOCTOR WHO in America—a complex and fascinating journey into pop culture—stretches much further back.
In this book you’ll find the rich history of everything DOCTOR WHO in the USA—from American TV Guide listings of Canadian broadcasts in 1965, through the Dalek movies, the early struggles of the Public Broadcasting System, the BBC sales attempts, the official debut on American television in 1972, the explosion in popularity among US viewers in 1979, the twentieth anniversary celebration in 1983, the conventions, the books, the merchandise, the fan clubs, the video releases, the games, the USA Tour, and every imaginable fan activity including cosplay, fan films and audios, PBS pledge drive volunteering, websites, podcasts, and much more, to the new heights of success, popularity, and fandom participation in the 21st century. It’s an enlightening and entertaining journey for everyone who admires DOCTOR WHO…and not just for American fans, but devotees around the globe.
Think you know everything there was to know about our favorite Time Lord and his history? Get ready to discover a “New New World” in RED WHITE AND WHO: THE STORY OF DOCTOR WHO IN AMERICA!

The softcover book comes in at 704 pages, and boasts over 600 images. The book is a collaborative effort by Steven Warren, Jennifer Adams Kelley, Nicholas Seidler and Robert Warnock, along with Janine Fennick and John Lavalie. It is scheduled for release August 21. Visit ATB Publishing for more information.