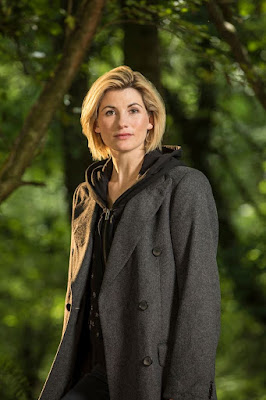 It's been a few weeks since Jodie Whittaker was announced as the 13th incarnation of the Doctor on Doctor Who. Reactions have run the gamut between exultation to a more cautious approach, which is often the case when faced with the dawn of a new regeneration of the classic character. However, how does Jodie Whittaker feel? After all, she's the one in the eye of the hurricane, so to speak.

Whittaker recently sat down with the BBC and BBC Radio 6 to share what her experience has been since the announcement.

First up, here's Jodie talking to the BBC:


You can listen to the interview with BBC Radio here, and find a brief description of the territory covered below:

In her first broadcast interview since being announced as the new Doctor Who friend of the show Jodie Whittaker tells BBC Radio 6 Music's Shaun Keaveny about when she found out she had the part, how she's not on social media and how she got excited when the announcement was made on TV "I got excited and I knew I was under the hood"


Jodie Whittaker will make her debut as the 13th Doctor during the Doctor Who Christmas Special, "Twice Upon a Time."

For more on Doctor Who, visit the official site here.