CELEBRATE 'THE LOST BOYS' 30TH ANNIVERSARY WITH THE SEQUEL COMIC! 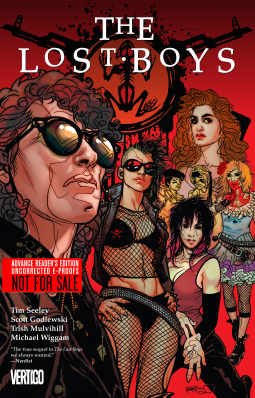 It’s the 30th Anniversary of the vampire cult-classic film, The Lost Boys, and Vertigo is celebrating with the release of a new sequel comic collected edition! THE LOST BOYS is the comic sequel to the nostalgic ‘80s thriller, marking the return of the Frog and Emerson brothers. The town of Santa Clara has long been a haven to an unruly threat—a group of vampires busy feasting on the locals. And now, following the events that led to the death of the coven’s head vampire, Michael and Sam and the rest of the city are attempting a return to a “normal” life—but that won’t last long. Soon, Michael and Sam Emerson find themselves, once again, immersed into the dark and twisted world of vampires, and in need of help from the militant vampire hunters Edgar and Allan Frog. As the brothers take on a whole new group of undead bloodsuckers—the Blood Belles—they’ll soon find help in the form of a shirtless sax man, aka the Believer (if you can believe it). Your favorite blood-and-fangs flick continues here!
Writer Tim Seeley (NIGHTWING, Hack/Slash) and artist Scott Godlewski (THE DARK & BLOODY, Copperhead) deliver a gruesome and stylish return to the bloody boardwalks of Santa Clara.

The comic trade is available next Wednesday 8/9, in comic stores, and available everywhere books are sold Tuesday, 8/15.