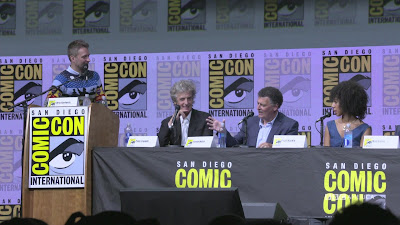 San Diego Comic-Con was host this weekend to two Doctors and a companion from the classic era of Doctor Who -- Peter Davison (Fifth Doctor), Colin Baker (Sixth Doctor), and Sophie Aldred (Ace). Discussion includes the enduring appeal of Doctor Who, both old and new, their experiences on show, and their reactions to the casting of Jodie Whittaker as the first female Doctor.

Check it out in its entirety below:

The trio also sat down to chat with SYFY WIRE:

Also at SDCC was the last Doctor Who panel for Peter Capaldi as he took the stage with Steven Moffat, Michelle Gomez, Mark Gatiss, Matt Lucas, and Pearl Mackie. The panel was moderated by Chris Hardwick. They also shared their thoughts on the new Doctor, and Peter received a rousing send-off from the fans. The complete panel can be seen below:


As a bonus, watch Peter Capaldi's priceless reaction to a question he's never quite gotten before. It takes him a bit to regain his composure, and it makes us realize just how much we'll miss him when he's gone.