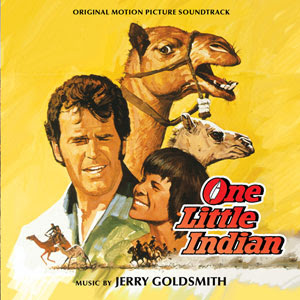 ONE LITTLE INDIAN
Music Composed and Conducted by JERRY GOLDSMITH
INTRADA Special Collection Volume 383
Intrada announces a reissue of an earlier Special Collection release that went out of print virtually overnight -- One Little Indian.  Featuring updated packaging and slight remastering, Intrada offers one of Jerry Goldsmith's more charming scores for this Disney film. It was the first of a handful of projects Goldsmith composed for Walt Disney Studios, writing a full-blooded, energetic western score, including an exciting main title that immediately establishes a bold, exciting sense of adventure. If there’s a Disney touch to the score, it’s in Goldsmith’s sometimes sly, often brash approach to the physical comedy in the film and, in particular, the incongruous presence of the two camels. Goldsmith has sitar play the familiar first five notes of Maurice Jarre’s Lawrence of Arabia theme, and he provides a rambunctious, muted cornet tune for the animals. It all comes together into one of Goldsmith's most adventurous, spirited scores of the 70s and one of his strongest western efforts.For this reissue, Intrada has done minor remastering, using the 35mm 4-channel session tapes vaulted on 2" tape and mixed by Bruce Botnick to present the complete score in crisp stereo sound.  The film features James Garner as Corporal Clint Keyes, a deserter from the Union Army who’s on the run from the man ordered to hang him. After a short-lived horse chase, Keyes is captured and brought to an army outpost where Keyes’ execution is to take place. While Keyes is being held, a group of Cheyenne prisoners is brought in, including a young boy (Clay O’Brien) dubbed Mark, who is discovered to be a white youth captured in an earlier raid. Mark escapes and Keyes breaks himself out, hooking up with Mark after procuring a couple of camels who are AWOL from the U.S. Camel Corps. While in continual pursuit, Keyes develops a grudging friendship with the two camels, eventually encountering a widow (Vera Miles) and her daughter (Jodie Foster), whom Keyes tries to convince to take Mark into their family.
INTRADA Special Collection - Volume 383Bar Code: 7 20258 53832 1Retail Price: 19.99AVAILABLE NOWFor track listing and sound samples, please visithttp://store.intrada.com/s.nl/it.A/id.10887/.f