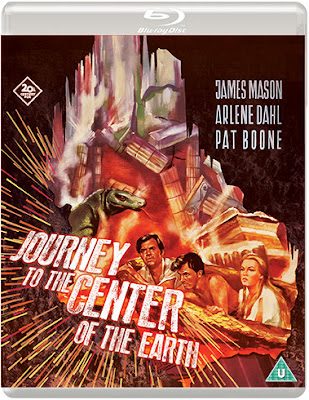 Eureka Entertainment to release JOURNEY TO THE CENTER OF THE EARTH, a sci-fi, adventure extravaganza on Blu-Ray, as part of the Eureka Classics range on 18 September 2017.
Jules Verne’s classic novel, Journey to the Center of the Earth, is brought to the screen in this thrilling adventure about a band of intrepid explorers descending to the hidden reaches of our world.
Professor Lindenbrook (James Mason; 20,000 Leagues Under the Sea, North by Northwest) discovers a long hidden message that reveals the existence of a passage into the centre of the Earth. Leading a team of unlikely adventurers (including Pat Boone, Arlene Dahl and… a duck), the groups daring expedition will see them come up against exploding volcanoes, rockslides and even flesh-eating reptiles!
Scored by the legendary Bernard Hermann and filmed in stunning Cinemascope, Journey to the Center of the Earth is a much beloved classic, and a landmark in both Science-Fiction and Adventure filmmaking. Eureka Classics is proud to present the film for the first time on Blu-ray in the UK, from a stunning 4K restoration.
JOURNEY TO THE CENTER OF THE EARTH (Eureka Classics) New & Exclusive HD
Available to order from:Amazon http://amzn.to/2vjUI6G
BLU-RAY SPECIAL FEATURES:• 1080p presentation from a definitive 4K restoration• Optional stereo PCM soundtrack and 5.1 DTS-HD Master Audio options• Isolated music and effects track • Optional English subtitles for the deaf and hard of hearing • Audio Commentary with Actress Diane Baker and Film Historians Steven C. Smith & Nick Redman• New video interview with critic and author Kim Newman • Featurette on the film’s restoration • Original theatrical trailer• PLUS: A booklet featuring an original review of the film from 1959; a poster gallery; and a selection of rare archival imagery