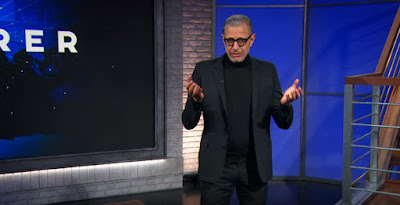 Explorer is a show like no other. This talk show-documentary hybrid brings you closer to some of the world’s most fascinating stories. From “evaporating people” in Japan and the changing face of the clown, to the illegal trafficking of an endangered fish known as ‘aquatic cocaine’ and the story of a brave Iraqi grandmother taking on ISIS, Explorer uncovers incredible stories. With a fresh format of in-studio presenting and incredible reporting viewers can delve into the world’s beauties, oddities, incredible inventions and explore the issues that we face today. So strap yourself in and let our award-winning filmmakers and journalists be your guides as they open up the world for you with illuminating stories, exclusive reports and compelling conversations. It’s time to explore with National Geographic’s Explorer…

Each week Explorer is presented by a different host from the studio. Meet the hosts:

So what’s on the agenda:

Join host Jeff Goldblum as Explorer travels to Japan where an estimated 100,000 people choose to disappear from society each year. Bryan Christy examines the bizarre phenomenon of the nation's "evaporated people." Also, dive deep into the frigid waters of Antarctica in search of crucial data that could help save our oceans. Then, warm up as we sample the hottest chili peppers on earth. Plus, a lively interview with actor Sam Rockwell.

Join host Jeff Goldblum as Explorer takes you around the globe for an in-depth look at Big Pharma, prescription drugs and the opioid epidemic. Then, nearly two hundred years after he led a slave rebellion, the final chapter of Nat Turner's moving story can finally be told. Plus, Goldblum talks with the man who inspired his performance in The Grand Budapest Hotel, former Ambassador to the Czech Republic Norman Eisen.

Explorer takes you to India for a rare look at the nation's gay community. Correspondent Dan Savage discovers how gay men are living their lives despite India's laws against homosexuality. Plus, host Jeff Goldblum explores "the hidden side of everything," when Freakonomics co-author Stephen Dubner joins him for a thought-provoking interview. And, join us on a long, strange trip, as we trace the fascinating history of marijuana. 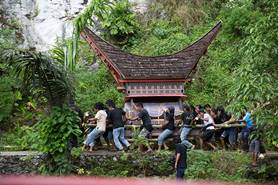 Join host Ted Danson as Explorer travels through the treacherous roads of The Democratic Republic of the Congo to track down warlords mining and exporting black market gold. Then, Danson welcomes international activist and former first daughter Chelsea Clinton for a critical look at one of Africa's endangered treasures. Plus, how did they go from birthday party entertainers to feared cultural menaces? The changing face of the clown.

Join host Ted Danson as Explorer reveals a radical, ground-breaking approach to mental health involving a rare surgical procedure. Then, our similarities to our nearest primate relative may be more than physical. Correspondent Justin Hall heads to the forests of Tanzania where chimpanzees are reportedly displaying spiritual behaviour. Plus sample the new, heavenly dishes NASA's astronauts will take to space in an exploration of truly "haute," cuisine.
Join host Ted Danson as Explorer investigates the world's growing black market fish trade, exposing the international trafficking of the totoaba, an endangered fish known as "aquatic cocaine." Then, oceanic expert Andy Sharpless shows you the breakthrough technology that can pinpoint illegal fishing anywhere on earth. And, his business is speaking truth to power. Danson sits down with the executive director of Human Rights Watch, Kenneth Roth.

Join host Aasif Mandvi as we travel to the Pacific Rim for a dramatic look at Filipino President Rodrigo Duterte's controversial and deadly war on drugs. Also, from "Nightline," to Twitter, legendary journalist Ted Koppel offers his unique perspective on the evolution of news. Plus, put your money where your mouth is, literally. Trace the fascinating and surprisingly ancient history behind the brightest smiles you've ever seen, grillz.

Join host Aasif Mandvi as "Explorer," reveals a secret U.S. government program that monitors suspected terrorists in "Life on the Watchlist." Plus, a fascinating conversation with Nobel laureate Paul Krugman on the volatile intersection of politics and economics. Also, outsourcing isn't just for corporations any longer. Correspondent Jena Friedman shows how you can outsource almost anything in your life, even your own job.

Join host Nick Schifrin as Explorer travels to El Salvador for a moving investigation into the nation's strict abortion laws. Plus, CBS Evening News anchor Scott Pelley recounts how his career in journalism began with a twist of fate. Also, find out why "Long Island Lolita," Amy Fisher has a famous association with an infamous hair style. Guest correspondent Dave Coulier on that hilarious hairdo of the '80s, '90s and antiquity: the mullet.

Join host Peter Sagal as Explorer travels to Japan, where the nation is facing a growing problem, its dwindling population. Then, meet an Iraqi grandmother who is leading a brave militia in the fight against ISIS. And, high housing prices are causing millions of Americans to pack up and "go mobile." Correspondent Bill Mintz investigates the downsized American Dream.

Join host Ali Wentworth as Explorer reveals a breakthrough in crime solving. Witness how new DNA analysis is beginning to allow investigators to create modern mugshots and reopen cold cases. Then, we head to Afghanistan, where some parents are protecting their daughters from violence, by dressing them as boys. Plus, Olympic gold medallist Shaun White.

Join host Nick Schifrin as Explorer takes you to eastern India for an exclusive and revealing interview with His Holiness the Dalai Lama. Then, world renowned physicist Michio Kaku and theologian Candida Moss engage in a lively debate over planet Earth's physical and spiritual mysteries. Plus, correspondent Tim Samuels travels to Iceland in search of the island's most celebrated and most mischievous "residents," elves.

Join host Ali Wentworth as Explorer welcomes Reverend Jesse L. Jackson Sr. for a poignant interview on the evolution of the civil rights movement in America. Also, correspondent Ryan Duffy steps onto the soccer pitch, to see how with the world's most popular game is dealing with a dangerous dilemma. Then, he keeps going on the track, and in years. Meet an Indian endurance runner who may be as old as 119.

Join host Dan Rather as Explorer heads to a tiny nation that's having a big impact on medicine. With its unique genealogy and state of the art technology, Iceland just might save the world. Also, correspondent Ryan Duffy takes you inside the dark and deadly world of the illegal rhino horn trade. Plus, you may think pro wrestling is fake, but the secret behind the show is very real. We pull back the curtain on life in the ring.

Join host Peter Sagal as Explorer travels to Southeast Asia, where America's secret bombing campaign in Laos has left an enduring, deadly legacy. Then, witness the extraordinary measures U.S. Marines are taking to save an Afghan man's life. Also, from blood pressure to mood, see how new technology is allowing you to mathematically track your way to a better life. And, StarTalk host Neil deGrasse Tyson sits down with director Ron Howard.

Join host Peter Sagal as Explorer travels to Mexico where the nation's war on drugs has had unintended, deadly consequences. Visit a remote town in the Mexican state of Guerrero where ordinary citizens are taking up arms against drug cartels and gangs. Then, we head to the plains of Oklahoma where a very different kind of crime wave is underway, cattle theft. And, Homeland star Mandy Patinkin on his mission to help refugees around the world.