Fox host an exclusive War for the Planet of the Apes Q&A panel event. Watch A Clip Here 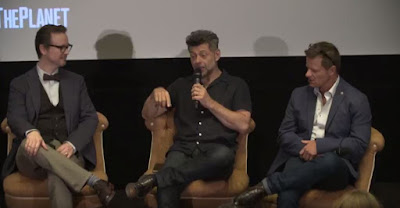 Twentieth Century Fox hosts an exclusive War for the Planet of the Apes Q and A panel event with guest speakers and film talent
Ahead of the release of the hotly anticipated War for the Planet of the Apes, Twentieth Century Fox hosted an exclusive footage screening of the movie, showcasing the first hour of the film, followed by a one-off Q&A panel event.
The panel saw star Andy Serkis (who plays the central ape character Caesar in the trilogy of films), director Matt Reeves, Steve Zahn (new character Bad Ape) and special guests Lauren Brent (a primate behavioural ecologist) and Zanna Clay (a comparative psychologist specialising in great ape behaviour) discuss the themes raised within the film.
A clip from the event can be found here in which Andy discusses his research into Ape behaviour and how he brought that to the role of Caesar:
In War for the Planet of the Apes, the third chapter of the critically acclaimed blockbuster franchise, Caesar and his apes are forced into a deadly conflict with an army of humans led by a ruthless Colonel.  After the apes suffer unimaginable losses, Caesar wrestles with his darker instincts and begins his own mythic quest to avenge his kind.  As the journey finally brings them face to face, Caesar and the Colonel are pitted against each other in an epic battle that will determine the fate of both their species and the future of the planet.