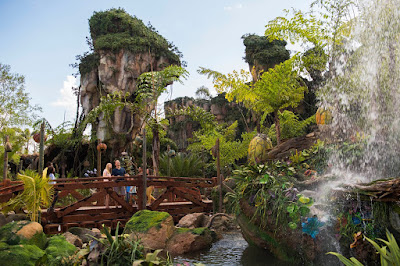 In grand preview dedication ceremonies for media today, Disney’s Animal Kingdom unveiled a world out of this world — of massive mountains floating in the sky, rainforests pulsing light and breathtaking flights for explorers soaring above an alien moon on the backs of great winged banshees.

When it opens to the public on May 27, Pandora – The World of Avatar will transform, transfix and transport Walt Disney World Resort guests to an all-new Disney land beyond belief – 4.4 light years away from Earth.

Set with artifacts found throughout the Pandoran landscape, the dedication stage was a tapestry of sights and sounds. Drummers pounded out traditional rhythms, colorfully dressed performers led a procession full of pageantry and artful banners fluttered in the morning sky.

Inspired by the blockbuster motion picture AVATAR from filmmaker James Cameron, the new 12-acre land immerses guests in the lush world of Pandora in a time frame a generation after the human-Na’vi conflict in the Oscar-winning film.

In a collaboration of two master storytellers, Disney joined with Cameron’s Lightstorm Entertainment in a multi-year project to bring to life the mythical world of Pandora.

“Working with Jim and his team was a dream come true for us, as we pushed the limits of creativity and innovation to bring the digital world of Pandora to the real world of Disney’s Animal Kingdom,” said Bob Iger, chairman and CEO of The Walt Disney Company. “Now anyone who has ever dreamed of visiting this extraordinary world can explore the astonishing landscape and ecosystem, soar on the back of a banshee and actually become part of the AVATAR adventure.”

The breathtaking, otherworldly beauty of Pandora that amazes by day will glow at night when bioluminescent flora and special nighttime programming add to the fascination guests will feel. 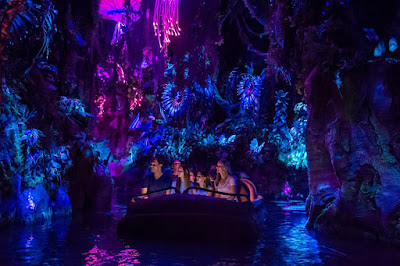 Na’vi, the indigenous blue people in the film, call Pandora home. Cave paintings give hints of the Na’vi culture, and totems they weaved point guests down pathways threading through the overgrown rainforest, punctuated by bizarre sounds of animals not of this world and alien plants that glow with light. Disney Imagineers created a soundscape meant to evoke an alien jungle.

Some of the most creative sculptors in the world were recruited to help shape the new land, with the overriding message of connecting everything to the value of nature — and the transformative power of adventure and conservation.

“I never thought I’d see the day when the Pandora I imagined could be made physically real,” said Cameron. “Working with Disney to bring this world to life has been an amazing experience, and the result is something I think everyone will love for generations to come. It really feels like you’re stepping into a dream.” 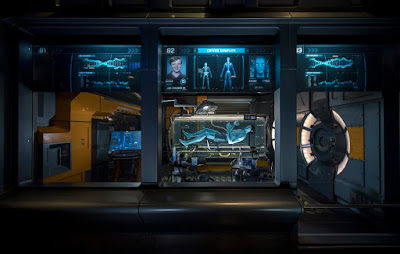 While inspired by Cameron’s film, Pandora – The World of Avatar was not envisioned as an extension of the film.

“It’s not the movie AVATAR that we are portraying,” said Joe Rohde, Walt Disney Imagineering portfolio creative executive. “It is the planet Pandora where you can come, you can visit, and have your own unique adventure. Rather than reliving the adventures of characters from the film, you’re going to come to the planet where those things happened — and have your own set of adventures you can own.”

And what an eye-filling, sky-filling planet it is.

Crossing an entry bridge, rusted-over across the years, guests follow a winding forest pathway to where the surreal landscape first comes into view. The exotic Valley of Mo’ara spreads before them.

Other-worldly sights, sounds and scenes abound. Adventurers roam verdant pathways underneath floating mountains laced with waterfalls dropping to quiet ponds. They venture deep inside a bioluminescent rainforest amid the sounds of Pandoran creatures roaming the underbrush.

• Avatar Flight of Passage sends explorers swooping and soaring on a simulated flight above the awe-inspiring world of Pandora on the back of awinged banshee. Floating mountains, rushing waterfalls, vast seas and dense jungle pass under-wing. This multi-sensory, wind-in-your-face experience is unlike anything Disney has created before. “You are grounded on a winged predator and flying through these amazing environments with special effects to add to the thrill,” Rohde says.
• Aboard the eight-person reed boats of Na’vi River Journey, families follow a sacred river deep into the bioluminescent rainforest under a canopy of exotic glowing plants, passing rock formations and Pandoran creatures on the move. This mystical journey culminates in an encounter with the Na’vi Shaman of Songs, who has a deep connection to the life force of Pandora and sends positive energy out into the forest through her music.

After roaming a landscape pulsing with entertainment happening throughout the day and night, adventurers can recharge at Satu’li Canteen, the fast-casual restaurant for Pandora housed in an old Quonset hut. Windtraders stocks Na’vi cultural items, toys, science kits and more. Pongu Pongu, with a design as eclectic as its expat owner, is a specialty-beverage kiosk that serves up cooling refreshments and a treat called Lumpia (loom-pee-ah), a pineapple-cream cheese spring roll.

Pandora – The World of Avatar expands the day-into-nighttime adventures at Disney’s Animal Kingdom, including new after-dark experiences such as the majestic Rivers of Light show, sunset safaris, live-entertainment street parties and vivid, animated imagery bathing the Tree of Life, centerpiece of the adventure park. 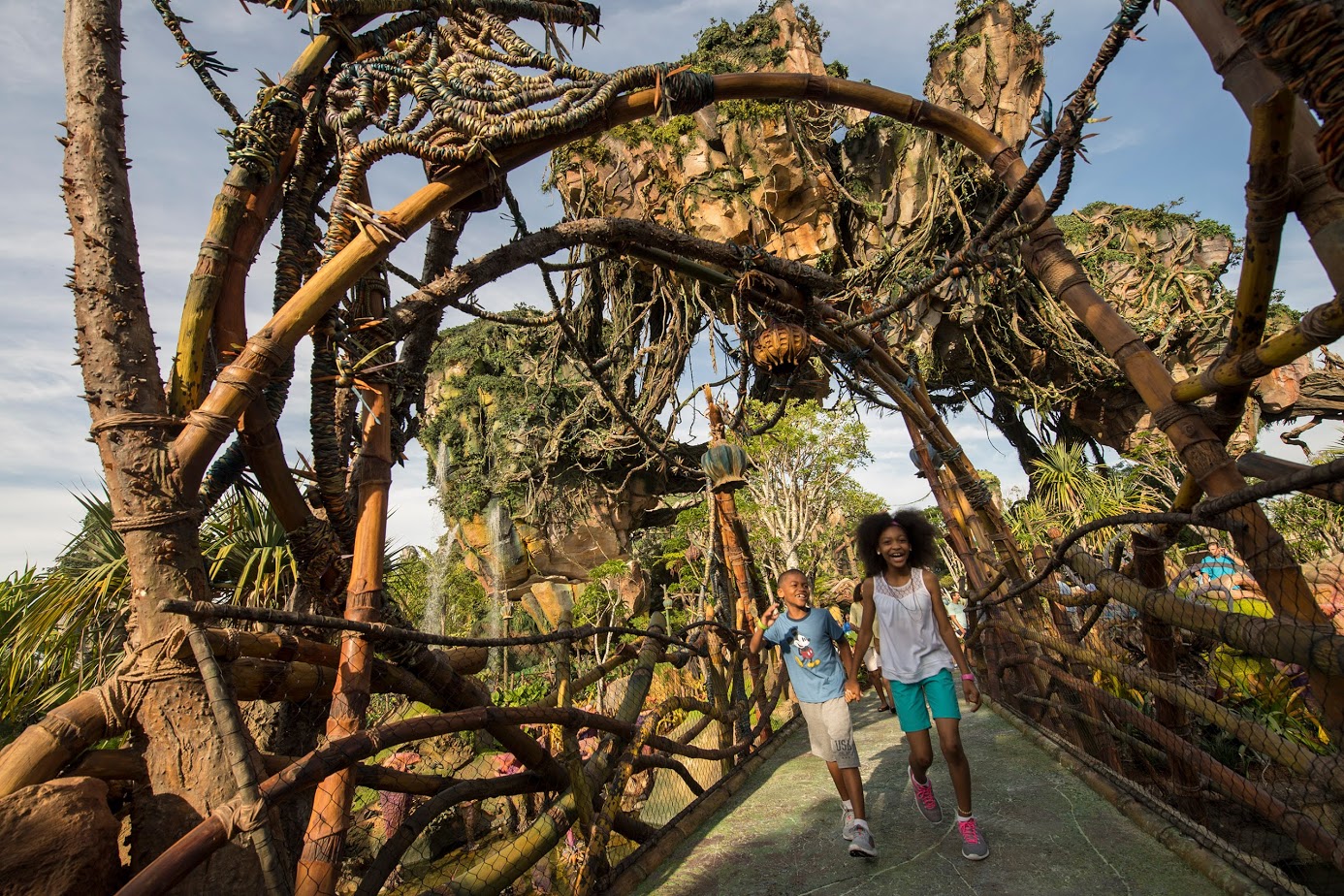 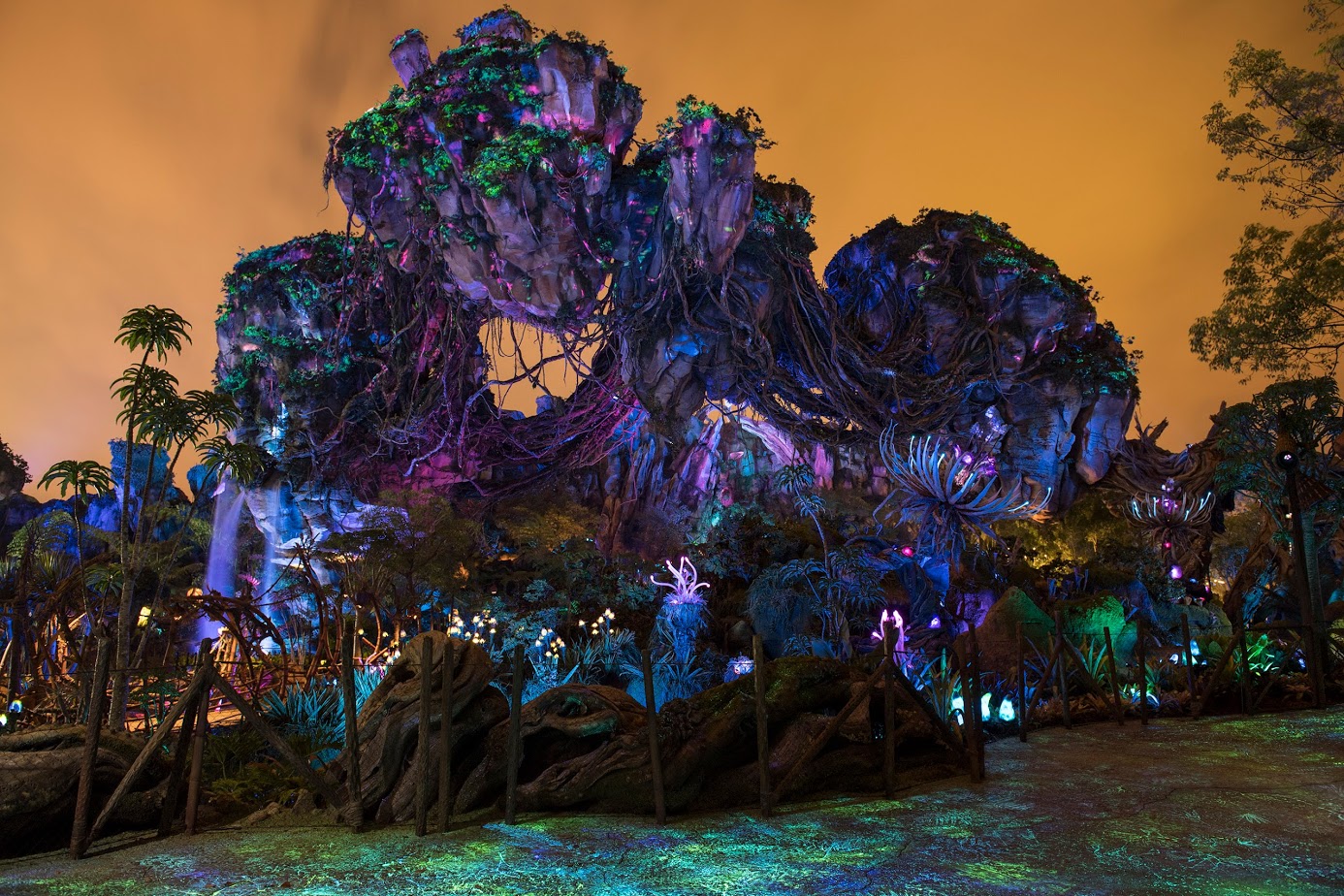 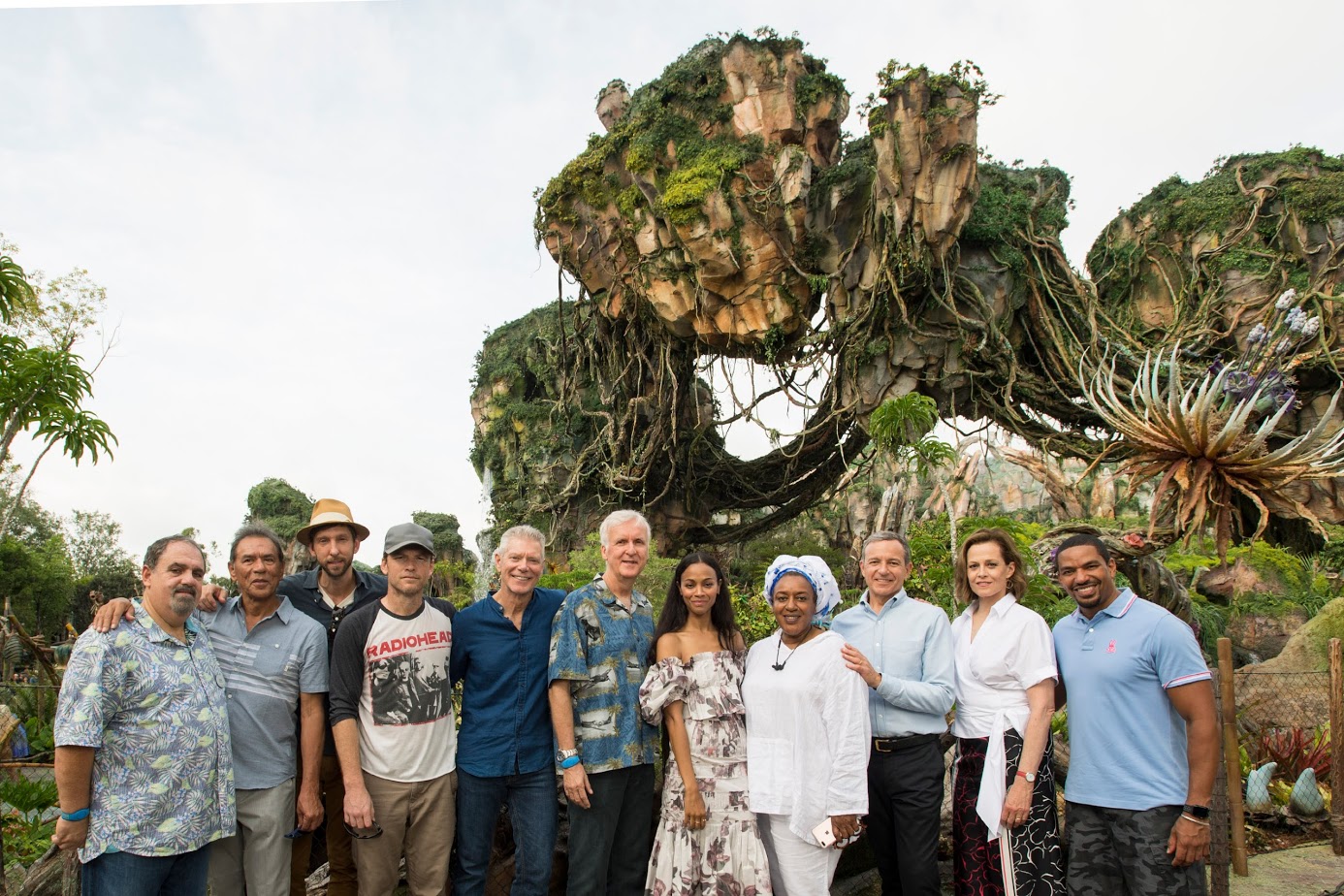 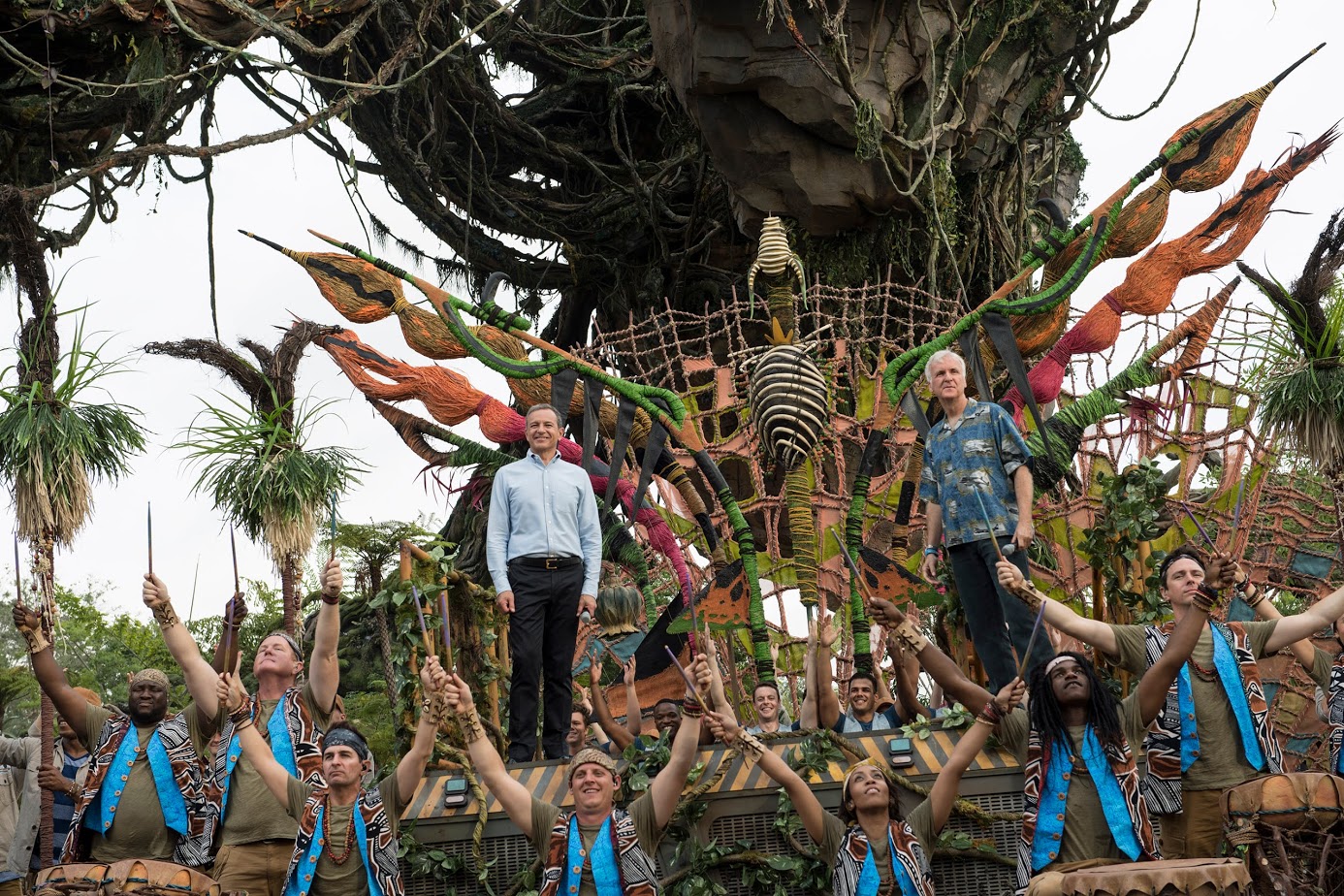 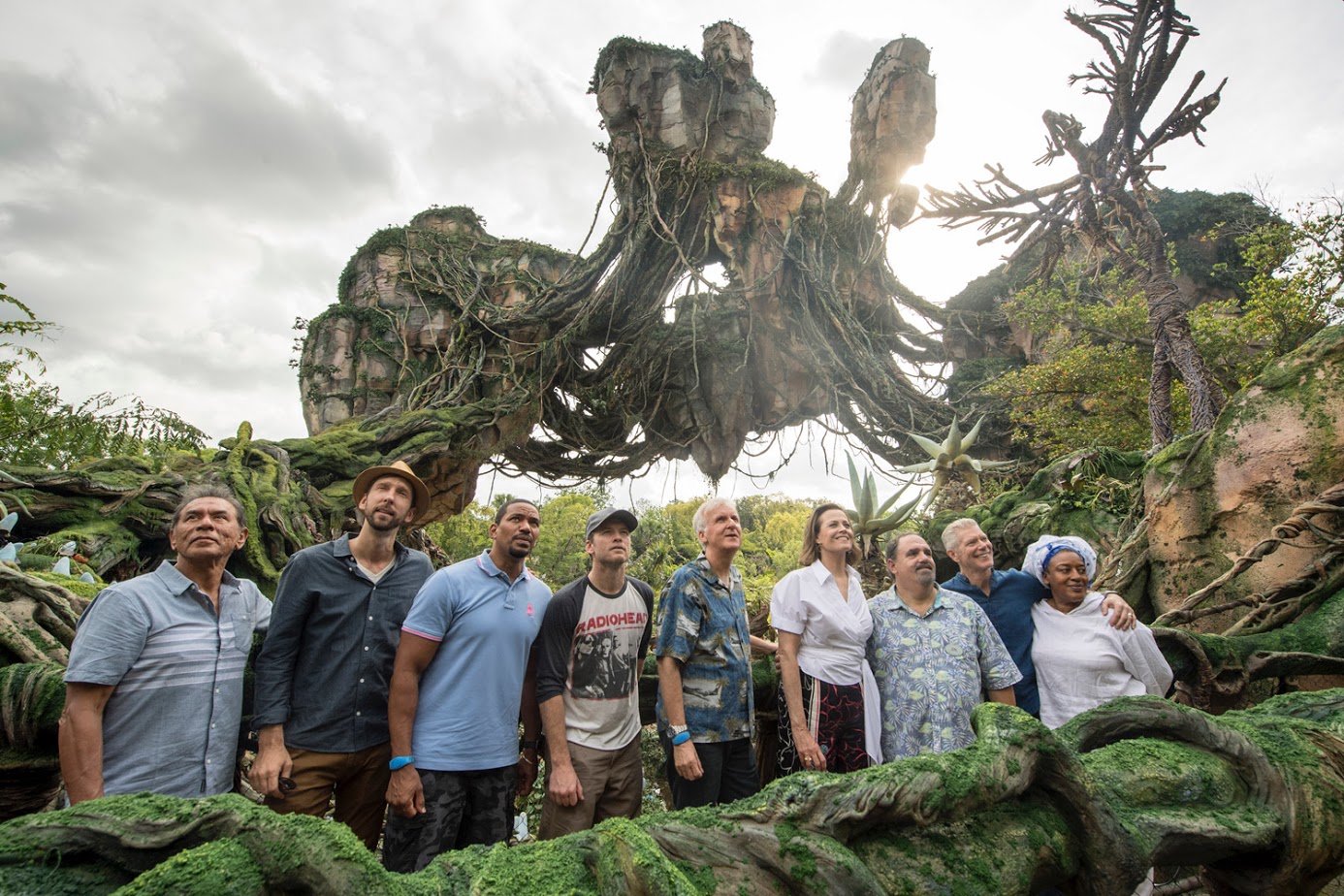 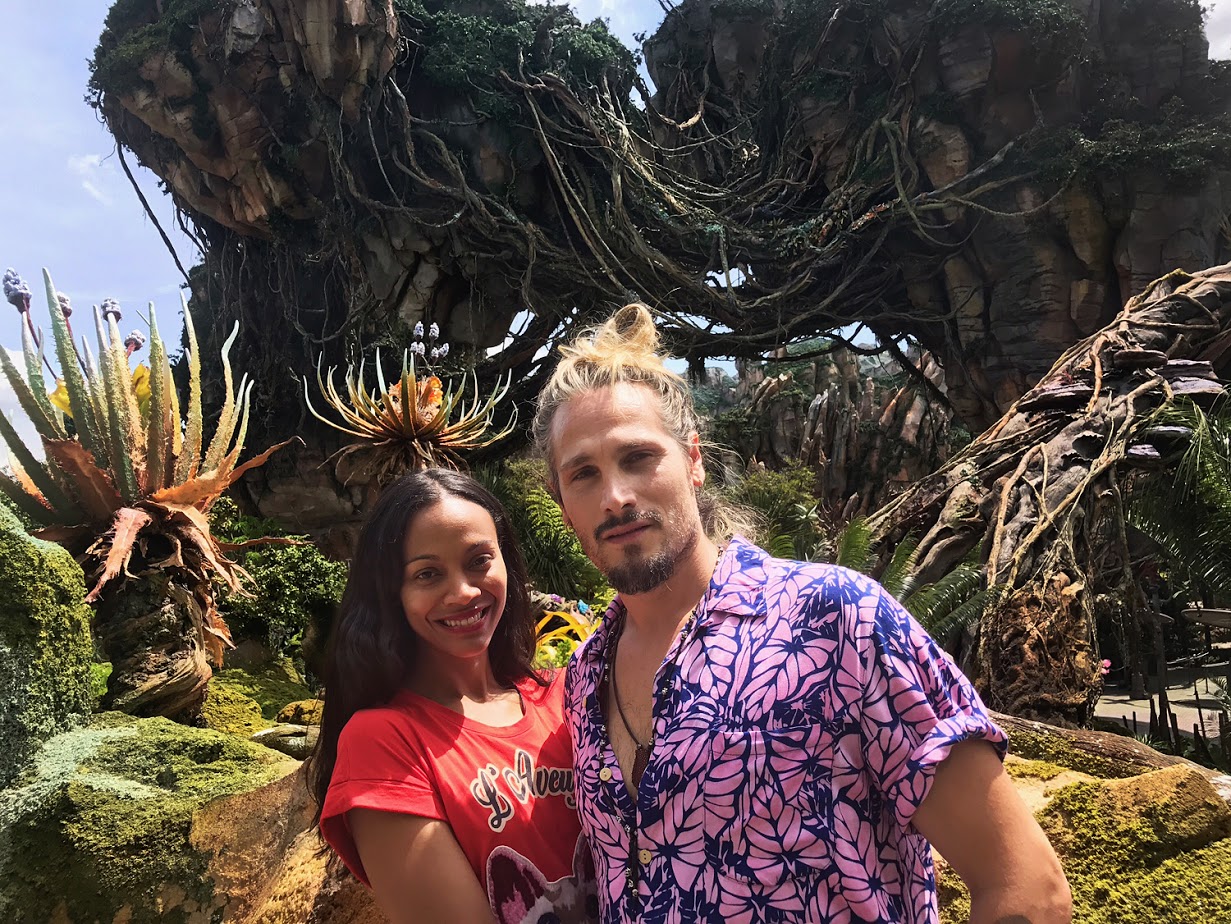