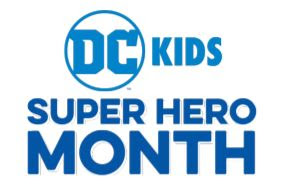 Calling all fans of DC Super Heroes! Warner Bros. Consumer Products (WBCP), in partnership with DC Entertainment (DCE), announces its first annual DC Kids Super Hero Month, designed to engage new and existing fans in this interactive initiative with their favorite DC Super Heroes and be inspired to be their own Super Hero.

This multi-faceted campaign will run through the entire month of April and kick off today, March 31, with an all-new episode of the original YouTube series DC Kids. Each week, DC Kids will have DC Kids Super Hero Month-themed shows such as “Acts of Wonder,” “Call for Creativity,” “Stellar Support,” and “Super Smarts.” In addition, the campaign will feature fun challenges and activities, as well as brand new content that will come to life across multi-digital channels and social media. The activations will also be supported by key partners, including Mattel, The LEGO Group, Rubie’s Costumes and more, as well as in-store and online support at various retailers, including Target, Toys‘R’Us, Walmart and Amazon.

“Super Hero Training Camp” is designed to teach fans of all ages what it means to be a DC Super Hero. With weekly challenges inspired by the iconic DC characters, training will highlight various qualities such as leadership, strength, kindness, creativity, friendship and more.

Participating fans are invited to engage throughout the month by sharing how they train to be a DC Kids Super Hero using the hashtags #DCKidsSuperHeroMonth and #HeroesInTraining.

Kids also won’t want to miss the DC Kids Super Hero Month sweepstakes, to be featured on DCComics.com and promoted on DC Kids’ Facebook page, Instagram and Twitter platforms, as well as DC’s and WBCP’s social media channels. Fans will have a chance to be the grand prize winner of a DC Super Hero Girls, Teen Titans Go! and Justice League Action product package, as well as three runner-up prizes to be awarded with one of the DC Super Hero Girls, Teen Titans Go! or Justice League Action themed packages.