RiffTrax Live! Brings Classic 'The Five Doctors' Story from Doctor Who to the Big Screen 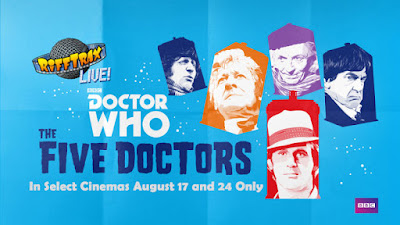 After a successful Kickstarter campaign, it was announced today that Michael J. Nelson, Kevin Murphy, and Bill Corbett of RiffTrax (and Mystery Science Theater 3000) fame will be bringing the classic Doctor Who tale, "The Five Doctors," to select theaters in the US this August. Tickets for the event go on sale at FathomEvents.com on April 14 for two shows -- the live show on August 17, followed by an encore on August 24.

"The Five Doctors" was released in 1983 as part of the 20th anniversary celebration of Doctor Who, and Michael J. Nelson seems particularly happy to be revisiting this special after all these years, as he told IGN:

As we're fans ourselves, RiffTrax has always been dying to do a live take on Doctor Who but we have strict guidelines about the number of doctors; Four seems too few and six is just ridiculous, just doctors running everywhere. The Five Doctors hits that magical sweet spot and I think RiffTrax fans are going to love it!

For more information on this and other live shows, please visit RiffTrax.com and be sure to purchase your tickets at FathomEvents.com starting April 14.

If you've never attended a RiffTrax Live! show, you're in for a real treat -- Don't miss out!