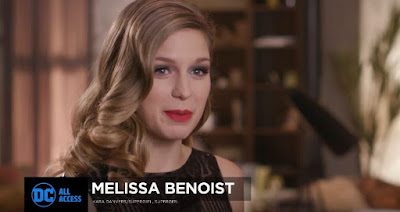 This week's episodes of DC All Access include an interview with the cast of Supergirl and The Flash as they discuss the upcoming musical crossover episodes. DC All Access also sits down with the WildStorm series artist Jon Davis-Hunt about redesigning the iconic WildStorm characters and where the story goes from here. Lastly, DC TV gives details on what to expect this week on The Flash, DC's Legends of Tomorrow and Powerless.

THE FLASH and SUPERGIRL: Musical Crossover Set Visit
We know Supergirl can carry a car, truck or plane... but can she carry a tune? In today's new episode of DC All Access, we go on set for next week's Flash/Supergirl musical crossover. Cast members from both shows fill us in on what we can expect and reveal the connections that guest star Darren Criss has with...seemingly everybody! Plus, we dive into some of this week's new comics, squad up with our panel of the week and give you a chance to win a Legion of Collectors Superman box!


THE WILD STORM: Character Redesigns
It's DC's newest pop-up imprint, and it's taken the world of comics by...well, you know. The Wild Storm #2 is on stands today and it continues the techno-conspiracy thrills of the previous issue while deepening the mystery and intrigue. In this DC All Access comics clip, we talk to series artist Jon Davis-Hunt about redesigning the iconic WildStorm characters and where the story goes from here.


LEGENDS Meets Apollo 13
Houston, we have a...new episode of #DCTV! Hector's having some problems with his clones, but it's nothing compared to what our small screen heroes are dealing with this week. Wally West is trapped in the Speed Force! The Legends of Tomorrow are lost in space! (Well, one of them is, at any rate.) And Van is still taking credit for all of Emily's work at Wayne Enterprises! Look, we can't do much for any of them, but we can help YOU by letting you know what to expect this week on The Flash, DC's Legends of Tomorrow and Powerless. Plus, we have your answers to last week's mind-bending new question!