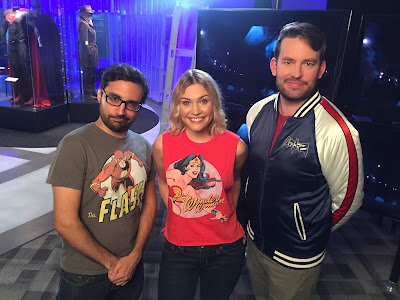 Already surpassing a million subscribers, DC All Access is taking it up a notch in the coming season. Adding celebrity correspondents to the mix, Rahul Kohli from CW’s iZombie and longtime DC All Access host Tiffany Smith will be the new faces for film, TV, and video games as they talk to the biggest stars within the DC Universe. Along with the new celebrity correspondents, SourceFed NERD and lifelong DC fan Whitney Moore will join the team, together with Jason Inman, as a new co-host of DC All Access to provide fans an insider’s look at DC’s comics, video games, film, television and more.
Leading to the highly anticipated release of Injustice 2, longtime gamer Kohli will sit down with the biggest names in gaming, debuting exclusive looks and breaking all the latest news, keeping fans up to speed on the biggest and best games from DC. Additionally, fan-favorite Hector Navarro will continue to break down DC TV every Monday.
As the DC film and TV universes are bigger than ever before, Smith will make sure DC All Access is in all the action with an expanded role as the new film and television correspondent. Straight from the set of the Hollywood’s most anticipated films and massively popular TV series, Smith will present the latest news, A-list interviews and must-see sneak peeks.
“DC All Access has solidified its position as the one-stop source for the latest news hitting the DC Universe,” says said Paul Malmont, DC Entertainment’s Director of Interactive Marketing. “By adding Rahul and Whitney to the series and expanding Tiffany’s role in covering TV and film, the show is becoming bigger and better than ever before.” Moore will make her DC All Access debut in today’s episode, which will also include an interview with Kohli.
Adding to the stellar lineup of original programming, the brand new YouTube series DC Kids will also premiere in the coming weeks. In partnership with Warner Bros. Consumer Products and DC Entertainment, and from Telepictures Productions, the same award-winning team that produces DC All Access, DC Kids is the show for all kids that love Super Heroes – hosted by two kid super-fans, Jett and Analei! Filled with family-friendly content, DC Kids will present unboxings, demos and first-looks at the latest action figures, toys and other cool products, do-it-yourself crafts, recipes and activities, game-show style competitions and so much more! Plus DC Kids will be on location at New York’s Toy Fair to capture some of the hot new toys kids and fans can look out for throughout the year. The first episode of DC Kids premieres on YouTube Friday, March 3.
“From ‘DC Super Hero Girls’ to ‘Teen Titans Go!,’ there is a massive fan base of young viewers looking for the latest news, products and content about these iconic characters,” says Scott Gordon, Director, Digital Marketing, Warner Bros. Consumer Products. “We’re excited to partner with DC to launch DC Kids as a new way to directly reach these passionate fans, and create a space that is specifically geared to a young audience.”
Fans can subscribe and view DC All Access on DC Entertainment’s YouTube page at https://www.youtube.com/user/DCEntertainmentTV.
Fans can subscribe and view DC Kids on YouTube page at https://www.youtube.com/DCKids and the DC Kids website,  www.DCKids.com.