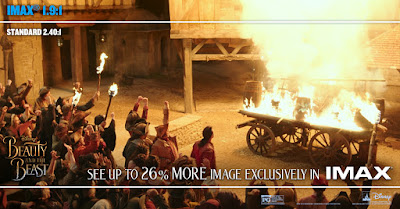 In anticipation of the upcoming release of Beauty and the Beast, IMAX is pleased to announce that the entire film will be specially formatted and presented in an expanded 1.9:1 aspect ratio. This means that only in IMAX the movie will fill more of the screen, and fans will see 26% more of the image in IMAX than standard theatres, for a truly enchanted moviegoing experience.

To illustrate the expanded aspect ratio, IMAX created a GIF and a special image that depict what movie-goers will see in standard theatres versus what they will see in IMAX. 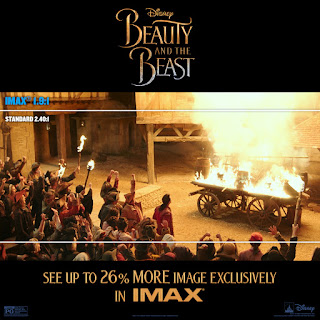 In addition, IMAX also released its exclusive art for the film that celebrates Belle and the Beast’s iconic ballroom scene while the enchanted Chip, Mrs. Potts, Lumiere, Cogsworth and more look on.

The IMAX release of Beauty and the Beast will be digitally re-mastered into the image and sound quality of The IMAX Experience® with proprietary IMAX DMR® (Digital Re-mastering) technology. The crystal-clear images, coupled with IMAX's customized theatre geometry and powerful digital audio, create a unique environment that will make audiences feel as if they are in the West Wing of Beast’s Castle.

About Beauty and the Beast:
Disney’s Beauty and the Beast is a live-action re-telling of the studio’s animated classic which refashions the classic characters from the tale as old as time for a contemporary audience, staying true to the original music while updating the score with several new songs.