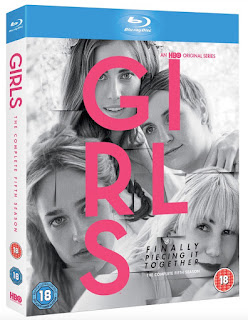 London, January 3, 2017 - Before the highly-anticipated final season kicks off, check out the “spectacular” (Vulture) fifth season of the Emmy®- and Golden Globe-winning HBO comedy Girls. Starring and created by Lena Dunham and executive produced by Judd Apatow and Jenni Konner, the hit series follows the assorted humiliations and rare triumphs of a group of girls in their mid-20s—each facing new challenges in life and love. GIRLS: The Complete Fifth Season will be available on Blu-rayTM and DVD January 16th, 2017. The Blu-rayTM and DVD sets both feature a free digital download of all 10 episodes, plus exclusive bonus content including more than two dozen never-before-seen deleted and extended scenes.   As Season 5 begins, Hannah (Lena Dunham) has put her writing ambitions aside and is teaching alongside Fran (Jake Lacy), her new boyfriend. Marnie (Allison Williams) realises that she needs more space after her honeymoon with Desi (Ebon Moss-Bachrach). While working towards becoming a therapist, Jessa (Jemima Kirke) also manages a budding relationship. And Shoshanna (Zosia Mamet) is thriving at her new job in Japan, flirting with her boss despite her long-distance relationship with Scott (Jason Ritter). Honest and uproarious, with unexpected surprise turns, the fifth season of Girls promises to maintain the series’ place as one of the most talked-about shows on television.   Other GIRLS stars include Alex Karpovsky as Ray; Adam Driver as Adam; and Andrew Rannells as Elijah. Returning guest stars for Season 5 of Girls include: Rita Wilson as Marnie’s mother; Peter Scolari (2016 Emmy® Winner, Outstanding Guest Actor in a Comedy Series for his role) and Becky Ann Baker as Hannah’s parents; Jon Glaser as Laird; Gaby Hoffman as Adam’s sister, Caroline; Aidy Bryant as Abigail; and Jason Ritter as Scott. New guest stars this season include: Corey Stoll as Dill; Lucy Liu as Detective Mosedale; and Frank Wood as Oscar.
Girls: The Complete Fifth SeasonBlu-ray & DVD  Street Date: January 16th, 2017Order Date: Available to pre-order nowRating: 18Runtime: Approx. 300 minutes (excluding bonus materials)

About HBO Home Entertainment®
HBO Home Entertainment develops, distributes and markets an extensive array of critically-acclaimed and groundbreaking programs in three formats—Blu-ray, DVD, and Digital HD—throughout the world.  Releases include the global hit Game of Thrones®, the #1 selling TV on DVD/Blu-ray title in major territories throughout the world over the past four years, in addition to current hits and classic favorites including True Detective®, Girls®, The Sopranos®, Sex and the City® True Blood®, The Wire® and Entourage®. The company’s catalog contains hundreds of titles including multiple Emmy® Award-winning mini-series The Pacific® and Band of Brothers®, which holds the record through 2014 as the all-time best selling TV on DVD/Blu-ray title in the US; provocative programs from HBO Documentary Films including The Jinx: The Life & Deaths of Robert Durst and The Case Against 8; innovative movies from HBO Films including Game Change and The Normal Heart; hit Cinemax® original series including BansheeSM and Strike Back®; and comedy specials featuring stand-up performers like Bill Maher and Billy Crystal.  Launched in 1984, HBO Home Entertainment has offices in New York, London and Toronto. The company’s releases are sold in more than 70 territories around the world and are digitally distributed on a transactional basis across an expanding number of territories and platforms.