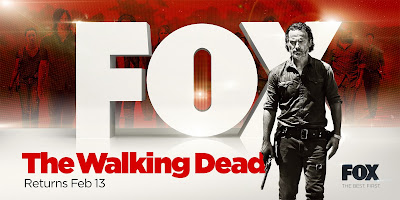 The World’s Biggest Show Returns to FOX with International Premieres of Season Seven Part B Airing within Hours of Broadcast on AMC in the U.S.


FOX, the world’s leading international entertainment brand, and a unit of Fox Networks Group, today announces that “The Walking Dead” will return for season seven part B on Monday, 13th February 9pm following the US premiere on AMC. The second half will consist of eight episodes.  “The Walking Dead,” which remains the number one show on television for a fifth consecutive season, is executive produced by showrunner Scott M. Gimple, Robert Kirkman, Gale Anne Hurd, Greg Nicotero, Dave Alpert and Tom Luse.  Internationally, “The Walking Dead” will return to audiences in 200+ FOX channel markets within 24 hours of the U.S. premiere, as part of Fox Networks Group’s continued commitment to broadcast the series near day-and-date globally.

FOX is the exclusive international home of The Walking Dead and the global leader in delivering the best scripted entertainment to international audiences first. Partnering with AMC on the series at script level, FOX launched the first ever global simultaneous release in 2010. Already announced to be returning for an 8th season, The Walking Dead returns to over 200 million international viewers in 200+ countries on FOX, with season 8 kicking off with the 100th episode of the series.