Doctor Who Christmas Special Coming to US Theaters this December! 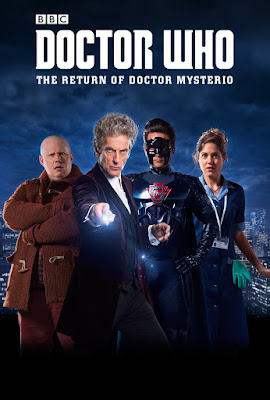 The Doctor Who Christmas Special, "The Return of Doctor Mysterio," will be screened in select theaters across the US just after the Christmas holiday, thanks to Fathom Events. There will be two opportunities to catch this special event -- Tuesday, December 27 and Thursday, December 29, at 7pm local time.

Special Fathom Features: The Doctor is back on the big screen this holiday season for a special two- night event featuring two exciting bonus programs, The Doctor: A New Kind of Hero, which asks the question what exactly is it about the Doctor that makes him so heroic, and Doctor Who Christmas Extra, looking back at the making of the The Return of Doctor Mysterio, both featuring appearances by stars Peter Capaldi and Matt Lucas, showrunner Steven Moffat, and many more.
The Doctor Who Christmas Special has long been a holiday tradition, and now for the second year in a row, Fathom Events and BBC Worldwide invite you participate in that tradition with a very special two-night presentation of Doctor Who: The Return of Doctor Mysterio in select cinemas nationwide onTuesday, December 27 and Thursday, December 29.
This Christmas sees The Doctor (Peter Capaldi, World War Z) join forces with a masked Superhero for an epic New York adventure. With brain-swapping aliens poised to attack, the Doctor and Nardole (Matt Lucas, Alice Through the Looking Glass) link up with an investigative reporter (Charity Wakefield, Wolf Hall) and a mysterious figure known only as The Ghost (Justin Chatwin, American Gothic). Can the Doctor save Manhattan? And what will be revealed when we see behind the mask?
Don’t miss the chance to ring in the holidays surrounded by fellow Whovians when Doctor Who returns to cinemas this Christmas!

For more information, and to purchase tickets, please visit FathomEvents.com.

Can't make it to the theater? Don't forget to catch "The Return of Doctor Mysterio" when it airs Christmas Day on BBC One and BBC America (or check doctorwho.tv to find out where to watch in your country).