By welshslider July 29, 2016
Reviewed by Patrick and Paul Gibbs

There are be plenty of critics saying that "Jason Bourne" isn't up there with the very best of the series, and pleading a case that the series should have been left to end with "The Bourne Ultimatum", which is one of the best trilogy wrap ups in popular film. And they might have a very solid point, except that it didn't end there. The studio wanted more, and as such, things veered wildly off track with "The Bourne Legacy", the overlong, outlandish and largely personality free Jeremy Renner spin-off which didn't even involve Jason Bourne, but did feature very brief appearances by most of the supporting cast of "Ultimatum", who came on screen just long enough invalidate the wrap up and leave the franchise more open ended so it could be milked for more,e and "oh babe, then it fell apart." In fairness,  "Legacy" was not a genuinely terrible film, but it was a very silly story that seemed more like a setup for a superhero movie than one that took place in the gritty world of the Paul Greengrass "Bourne" sequels, and it just never had any idea where it was going. It was the feature film equivalent of that season of "The Dukes of Hazzard" where cousins Coy and Vance took over for Bo and Luke.

As such, the franchise was left in a very weak state, and "Jason Bourne" was absolutely needed to bring it back on track, whether it be for to set things up for future installments, or just to fix mistakes and leave it on a more sure footing. While the new installment plays like an epilogue to the trilogy, better to end on an epilogue than a footnote. At least it gets it back to where it's supposed to be, and does so in style. 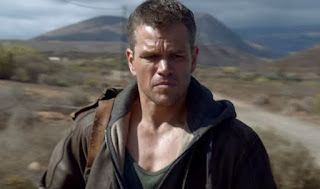 The film begins with Jason Bourne/David Webb (Damon) living off the grid in Greece, and making his living as a brawler, fighting bigger and stronger opponents and winning through his extensive training and skills, and perhaps more than a little bit of unfocused rage. He can't forgive himself for the things he did and what he used to be, and this tortured existence is something of a self inflicted punishment. But his world is shaken up a bit with the arrival of a figure from his past: Nicky Parsons (Stiles), the Treadstone analyst with whom Jason had once had a romantic relationship. Nicky tells Bourne that just because he remembers everything now doesn't mean he knows everythin g, and that the top secret black ops program is starting up again, and she needs his help to stop it. This leads to a dazzling chase sequence in the best Bourne tradition.

To reveal much more of the story set up would  require too many spoilers, but Bourne is pitted against the Director of the Central Intelligence Agency, Robert Dewey (Academy Award Winner Tommy Lee Jones, who adds a thrilling presence to the proceedings) an assassin with a score to settle (Cassell), and a mysterious young rising star in the agency, Heather Lee (last year's breakout star, Alicia Vikander.). The plot is actually pretty thin, but it all works well enough, and the action is every bit as pulse pounding as you would expect, in the raw, signature Greengrass style that has been often imitated but never duplicated. Not only does nobody do it better, quite frankly, nobody else really even comes close.

Damon commands the screen as usual, and whether he's fighting, demanding answers, or merely brooding, he' is always riveting to watch in this role. He is given able support from the rest of the cast, especially Jones and Vikander. While the screenplay by director Greengrass and Christopher Rouse, who won an Oscar for his work as editor on "Ultimatum" is lacking in any real sense of humor or many classic lines, it holds together and provides a sturdy base for the film. Still, it would have been preferable to enlist the aid of a veteran screenwriter to punch things up. This installment is intelligent and topical, with its hacking and "Wikileaks" plotline ridiculously topical at the moment, but it doesn't have the strong character connection moments or deep gazes into the moral quagmire of Bourne's world that we've gotten from the series at its best.

The biggest thing the film is missing is Joan Allen, who was almost as key a player as Greengrass in kicking things up a notch in the second film, and without her presence, we definitely found ourselves more prone to the thinking "get back to Bourne" more often than usual.

Still, there is far more that hits this mark than misses, and while "Jason Bourne" falls short of classic status, but it's still one of the most briskly entertaining movies of the summer, and is likely to leave most fans satisfied.